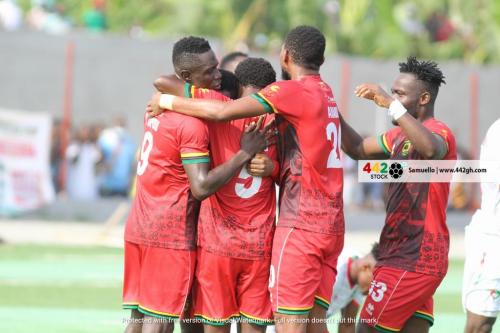 Matchday 13 of the 2020/21 Ghana Premier League fixtures were honour over the weekend at the respective match venues.

The biggest match of the week was the game involving Karela United and Asante Kotoko. The Porcupines on Sunday made history as they became the first team to end Karela United's home unbeaten run

The Anyinase based club have for the past 5-years been invincible at the Cosby Awuah Memorial Park but interim Coach Johnson Smith and his charges halted their run on February 7, 2021.

Kotoko who is yet to lose an away game this season extend that streak by beaten Karela United 2-0 with strikes from Imoro Ibrahim and Kwame Opoku getting on the scoresheet either side of the half to secure the maximum points.

They have leapfrog Karela United to the summit of the league after the win.

Clinton Duodu, Hafiz Konkoni and Moro Salifu all found the back of the net for Kweku Danso’s men before Charles Danso scored an injury time equalizer for Great Olympics.

Bechem move to second with the win while Olympics slip down to 5th following the defeat.

Aduana Stars moved into the top 4 with a narrow 1-0 win over academy boys WAFA in Dormaa.

Midfielder Emmanuel Osei Baffour scored the only goal of the game for the two time champions.

In Obuasi, Liberty Professionals shocked Ashantigold with a 1-0 victory to inflict more misery on the struggling Miners.

Ashantigold are now without a win in their last 5 games, while the victory was only Liberty’s 3rd of the season.

Joseph Esso opened the scoring for the Dawu-based side just before halftime. Suleiman Farhadu added the second on the hour mark to wrap up the win. Dreams are now unbeaten in 7 games in the Ghana Premier League.

Hearts of Oak rallied from a goal down to shared spoils with Leagon Cities at the Accra Sports Stadium. Kojo Obeng Junior second-half strike cancelled out Jonah Attuquaye's opener's for Legon Cities.

In Saturday’s game, Ebusua Dwarfs handed Inter Allies their 6th straight defeat in the Ghana Premier League with a 2-0 win in Accra.