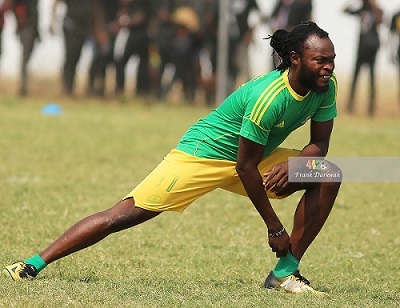 Aduana Stars marksman Yahaya Mohammed is the latest person to add his voice to the restart date of the new season.

Yahaya Mohammed in a radio interview called on the Ghana Football Association President Kurt Okraku to rescheduled the start of the new season.

The 2020/21 Ghana Premier League is set to start on October 30 has been announced by President Akufo-Addo in his 17th Covid-19 update.

But, Yahaya Mohammed urged the Ghana Football Association (GFA) to have a second look at the resumption date. According to him, players would need a minimum a month to get themselves ready to take to the field.

“The timing is very close because we have been home for a very long time. We usually use 30 days for pre-season. We are expected to train for three weeks and use the last week to play friendlies.”

“It’s going to be very difficult so if the GFA boss is hearing me they can push the start of the league to the middle of November so that we can use the whole of October for preparations.”

Ghana Football Association (GFA) Medical Committee head Dr Adam Baba this week also said the time frame for clubs to return to the field is too short and it is impossible to start the league in October.

"It is impossible to start the league in October from my point of view. If the government said go ahead, you can start but we cannot start in October,” Baba told Kumasi FM.

”There’s no team that can tell you that it has started preparation. We need a minimum of four to six weeks for the clubs, they need to purchase new players and start pre-season training which cannot be done in three weeks.

“Practically, we give ourselves four to six weeks from the time we’ve been asked to start so the earliest we might start in November.”

The 2019-20 Premier League was at the match week 15 when it was brought to a halt due to the outbreak of the coronavirus.

In June, the GFA Executive Committee took a decision to declared the season null and void.