Zakaria scores on debut as Chelsea go through in top spot 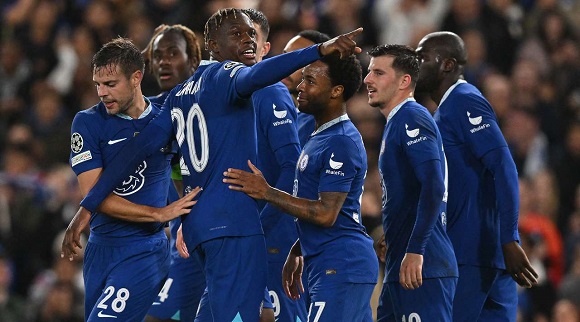 Chelsea survived an early scare as they registered their 100th Champions League victory by coming from behind to beat Dinamo Zagreb 2-1.

Graham Potter’s side had already secured top spot in Group E before kick-off, but they head into the knock-out stages in style after winning four of their six matches.

It was the visitors who made the better start at Stamford Bridge though, taking a 7th minute lead when Bruno Petkovic nodded home the first chance of the game after Cesar Azpilicueta had inadvertently headed Sadegh Moharrami’s cross back into the danger zone.

That lead didn’t last long though, with Raheem Sterling equalising for the Blues ten minutes later as he grabbed his first goal in nine games, slotting into the bottom corner after receiving Pierre-Emerick Aubameyang’s backheal in the box.

The England international should have put Chelsea ahead shortly afterwards when he scooped over on the half volley from close range, but it mattered not as Denis Zakaria, finally making his debut following a summer loan move from Juventus, found the bottom corner from near the penalty spot.

Edouard Mendy made a terrific save to keep the hosts ahead after the break, tipping Josip Sutalo’s powerful header around the post, but that was the closest Dinamo came to an equaliser.

Aubameyang nearly doubled the lead at the other end when rattling the bar from 20-yards, while Dominik Livakovic soon made a good stop to deny Kai Havertz.

Indeed, the visitors had their ‘keeper to thank for ensuring they were not beaten more heavily in the end, as he made two stunning stops late on, tipping a Mason Mount free-kick around the post before denying Conor Gallagher from point blank range.