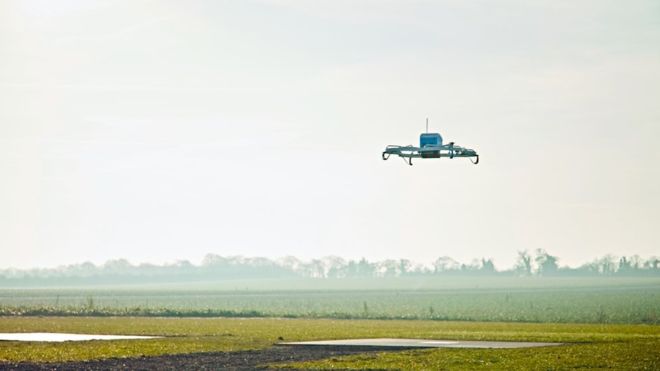 Retail giant Amazon has made its first commercial delivery using a drone, in the UK. The package arrived safely at its destination in Cambridge, 13 minutes after being ordered. A video showing the process details how the order was completed using an electrically powered drone flying at up to 400ft (122m).

One skeptic questioned how much of a "game changer" the limited trial of the service would be. As part of the testing for the Amazon Air service, the delivery took place on 7 December, although it was only revealed on 14 December. The Cambridge fulfillment center is home to the drones, which, once the ordered package is on board, travel along an automated track to the launch area.The drones then take off and fly completely autonomously, guided by GPS to their destination. They are capable of carrying items weighing up to 2.7kg (5lbs).

The aim is that all orders made using Amazon Air will be delivered within 30 minutes.

The trial will be expanded to dozens of customers living close to the warehouse in the coming months.

The safety of drones has come under the spotlight in recent months.

There have been reports of near-misses this year between drones and aircraft at London Stansted and Cornwall Airport Newquay.

"Safety is our top priority," Amazon said on its website. "We are currently permitted to operate during daylight hours when there are low winds and good visibility, but not in rain, snow or icy conditions."

There are Prime Air development centers in the US, UK, Austria, and Israel. The company is also testing its drone vehicles in "multiple international locations".

"This is a marketing coup for Amazon," said Natalie Berg, an analyst at Planet Retail.

"The real significance here is the impact it has on shopper expectations.

"Over the past few years, we've seen a proliferation of delivery options as retailers scramble to cater to changing shopping habits.

"Fulfillment has become a firm battleground in retail and the most successful retailers today are those who can deliver products to shoppers in the quickest, most convenient and economical way.

"Drone delivery is another string to Amazon's bow, but it's certainly not an industry game changer."