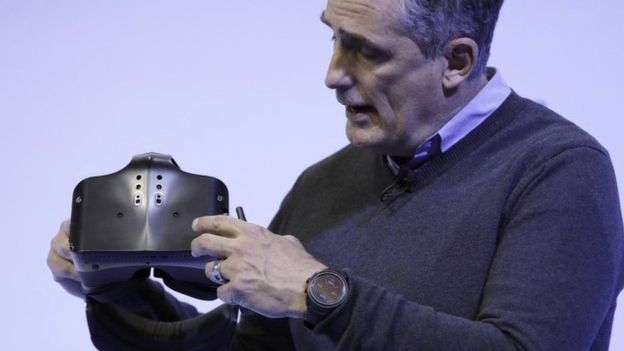 Xiaoyu Zaijia - or Little Fish - responds to voice commands using a combination of pictures, text and speech. Unlike many rival AIs it is dependant on a touchscreen

"AI has been growing steadily - every year our AI has been 50% better," he told the BBC at the CES tech show in Las Vegas.

"Those of us on the inside feel the acceleration now but we have been feeling it for the last decade.

"Just as 100 years ago the electrification of our society transformed industry after industry, I think AI tech has now reached that stage."

Little Fish's hardware has been developed by Chinese robotics firm Ainemo Inc but uses Baidu's AI operating system DuerOS. Existing digital assistants such as the Amazon's Alexa and Google Assistant are not screen-dependant but can be used by voice alone. Apple's Siri, however, continues to rely on a display to provide some of its information.

Little Fish will launch initially in China in March 2017 and currently only recognises Chinese languages. Baidu has not yet set a price.

"What we have seen so far in terms of digital assistants and smart speakers is very much first generation and it has all been about voice," said Geoff Blaber, tech analyst at CCS Insight.

"I would certainly expect that over the next 12 months we will see the next iteration of assistants that do integrate a number of different ways of interacting with the device - not just video but also gesture control.

"A richer variety of interaction methods helps bridge the gap in terms of the user experience. When they first start using one, a lot of users find it a steep learning curve."