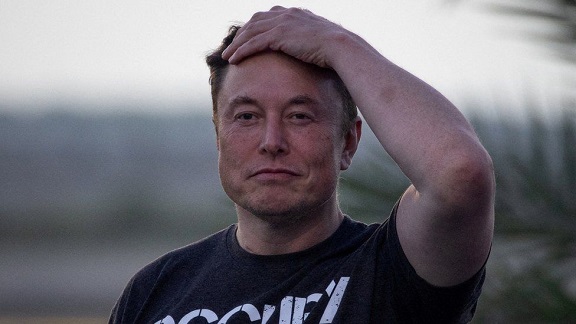 Tuesday, 17 January 2023 is the day analysts predict Elon Musk will become the number-one influencer on Twitter.

With 120 million followers, his account, @ElonMusk, is already the second most followed, after @BarackObama, the former US president's, which has 130 million.

And following a meteoric rise in the month since he bought Twitter, Mr Musk's will inevitably overtake, statisticians at Social Blade say.

This will be an unprecedented moment.

The social-media industry has never before seen a platform with a chief executive who is also its biggest personality.

So if Mr Musk is to become both Twitter's chief executive and its "chief influencer", what are the implications - for the billionaire and for the website?

In spite of recent controversies, Mr Musk's popularity on Twitter is undeniable and growing.

Over the past 12 months, he has gained 268,303 followers a day, on average, according to Social Blade, and lost followers on only five days, which can all be linked to news events.

He lost nearly 200,000 on 12 November, when major job cuts were announced at Twitter - and as he is likely to have gained new followers that day too, the actual number who unfollowed him must have been much higher.

"In some ways, having a CEO who is a major influencer on the platform has some advantages because it makes him very accessible to people."

Very few social-media chief executives are major influencers on their own websites.

Meta chief executive Mark Zuckerberg is also a celebrity - but not an active poster on Facebook, Mr Navarra says, and his posts are more corporate in tone.

READ ALSO: Elon Musk says he will create 'alternative' smartphone if Twitter is kicked out of Apple App Store

"He is very antagonistic and inflammatory and, some might even say, quite toxic," Mr Navarra says. "And for brands, he might be seen as potentially very dangerous."

Already a prolific tweeter, Mr Musk has been posting 76% more often since buying the platform, according to Social Blade.

On Tuesday, 22 November, he fired off 75 separate tweets, either as posts, replies or retweets. This is a record for him.

"It's great to have a CEO who uses the product," a former senior product manager at Twitter, who wishes to remain anonymous, says.

And it should not impede Mr Musk's direction of the company.

But he says: "I think people who tweet a lot are addicted - and possibly narcissistic. No single person has enough interesting things to say to the entire world to tweet more than five times a day."

On average Mr Musk is now tweeting once every 15 minutes during normal waking hours. Sometimes he posts at unusual times though including at 02:00.

The experts we spoke to all agreed that having a CEO immersed in his or her platform can be a good thing but all agreed that the type of content Mr Musk is posting could be problematic.

Recent tweets have included sexual imagery and swearing. And, responding to critics saying he was killing Twitter, he posted an adaptation of a meme of a man smiling at a graveside during a funeral.

Mr Navarra says Mr Musk is a huge engagement driver for Twitter and his recent tweets have brought in a significant number of new users or reactivated old ones.

"We only have to look back to another character that shares an alarming amount of similarities... with Elon Musk, which is Donald Trump," he says.

"Trump was also a huge driver of activity and engagement from his tweets and I'm sure that was a benefit to Twitter.

"Elon Musk is having a similar effect on the platform."

Twitter permanently suspended President Trump after the storming of the US Capitol building, in Washington, in January 2021, citing "the risk of further incitement of violence".

Mr Musk reinstated his account on 19 November, following a poll of Twitter users, though Mr Trump has not subsequently tweeted.

While gaining 8.6 million followers since buying Twitter, Mr Musk himself has followed only six new people in that time - bringing the total he follows to 129.

"He has no idea what the experience of normal users is," the former Twitter manager says.

"For example, he never sees ads - because we limit advertising served to the top 1,000 or so users. So he wouldn't have understood that part of the product before he bought it."

The former Twitter manager also says Mr Musk's skewed experience on the site as a top influencer may prevent him understanding how to improve it and grow it.

Twitter is smaller than other social networks and "average time spent was a severe constraint to our growth and ads business".

"People who are committed users spend a lot of time on the site - but they need to find a way to increase the time that the masses spend," the former Twitter insider says.

Every time Mr Musk logs into his account, he is greeted with notifications making him feel good and want to stay on the site.

But for most users, this is not the case.

Growing the number of Twitter users to a billion is one of Mr Musk's key goals.

Now, there are about 300 million - which, at the current rate, is the number of followers Mr Musk himself will have in two years' time, according to Social Blade projections.