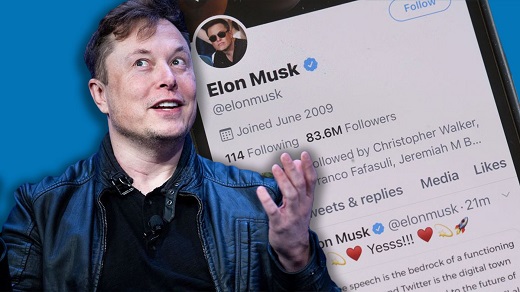 Elon Musk has offered to complete his proposed $44bn (£38bn) acquisition of Twitter in a dramatic U-turn on his decision to walk away from the deal.

Lawyers for Musk confirmed in a court filing on Tuesday that the world’s richest man is prepared to push ahead with the transaction on the agreed terms following months of legal drama.

The filing followed a report from Bloomberg on Tuesday that the Tesla chief executive had written to Twitter offering to close the deal at the original price of $54.20 a share, which resulted in a temporary suspension of trading in the company’s stock as the price rocketed more than 12% in New York. The shares closed up 22.2% at $52.

Musk had been set for a courtroom showdown with Twitter on 17 October, with multiple legal commentators warning he had a slim chance of succeeding in his attempt to scrap the deal.

“We write to notify you that the Musk parties intend to proceed to closing of the transaction,” read the notice, filed by Musk’s lawyers with the Delaware chancery court, which was overseeing the trial. The filing added that the adjournment of the Delaware trial and securing of debt financing are preconditions.

In response, Twitter said: “The intention of the company is to close the transaction at $54.20” – although it did not give more specific details in its response to Musk’s about-turn.

The Wall Street Journal reported on Tuesday that Musk had made the proposal to Twitter’s lawyers overnight on Monday and had filed a letter with the Delaware chancery court before an emergency hearing on the deal on Tuesday.

Twitter issued this statement about today's news: We received the letter from the Musk parties which they have filed with the SEC. The intention of the Company is to close the transaction at $54.20 per share.

Anat Alon-Beck, a law professor at Case Western Reserve University in Ohio, said Musk appeared to be “finally listening to his lawyers”. Musk was due to be questioned under oath by Twitter lawyers on Thursday and Friday as part of preparations for the Delaware trial. “He will be a fool to not at least try to buy the company now and avoid [a deposition],” said Alon-Beck, claiming that Musk “has no defence on trial”.

Although Musk’s filing has eliminated the impending trial, the sale process is not over yet, Alon-Beck said.

“It’s not like this is going to be cleared up tomorrow,” she said. “The parties still have to approve everything, sign and finalise the deal, and Musk still has to come up with funds to close it.”

Musk tweeted on Tuesday that buying the company would be an “accelerant” to “creating X, the everything app”, adding the process would be accelerated by up to five years without giving further details.