Is Windows 11 the beginning of the end for Skype? 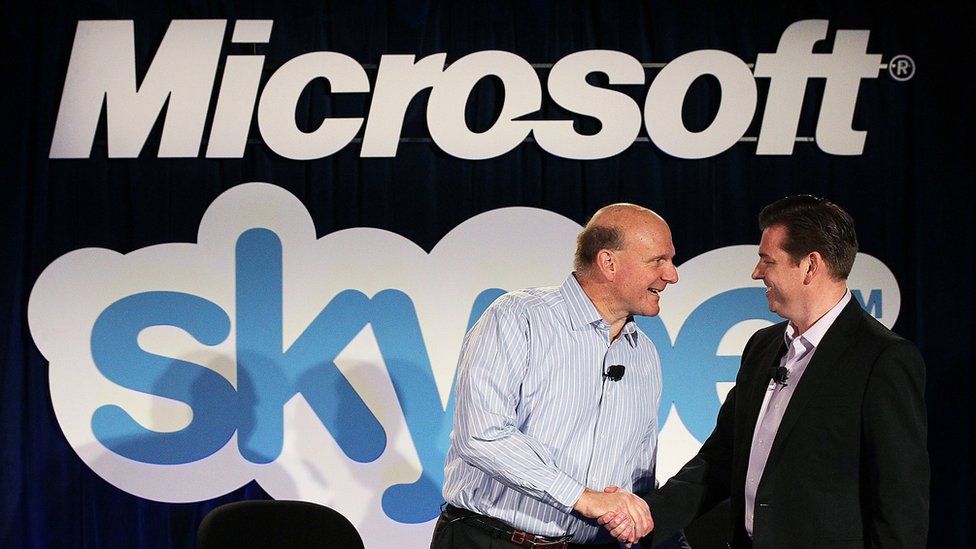 In 2011, Skype was Microsoft's "future of communication" - but not any more
Shares

Microsoft has officially announced Windows 11, its new operating system which will replace the current version over the next few years.

Among all the new features are two seemingly small but related things that jumped out.

First - Microsoft Teams, the video-calling app which saw a boom during 2020's pandemic, will be integrated into Windows 11 by default.

And second - Skype will not be, for the first time in years.

That seems to suggest that Teams is the new favourite child, and many pundits think this is the beginning of the end for what was once the king of calling apps.

Yet the reality is that Skype has been losing relevance for a long time.

'The future'
Microsoft bought Skype 10 years ago for $8.5bn (Â£6.1bn). At the time, it was the tech giant's biggest-ever acquisition, and there were questions over whether it was over-paying.

But Microsoft was buying into an app that had been downloaded one billion times and had hundreds of millions of users.

"Together we will create the future of real-time communications," Microsoft chief Steve Balmer projected.

It seemed to work - the app came bundled with every new computer, and user numbers were strong.

But by the middle of the decade, internet forums were full of posts asking "why is Skype so bad?" and complaining about updates. Many pointed to poor performance and questionable design choices.

At the same time, mobile messaging apps - such as WhatsApp or Facebook Messenger - were exploding in popularity and started to introduce video calls, one of Skype's main attractions.

The first version of Skype was launched in 2003, and despite frequent updates, it was starting to show its age.

Meanwhile, Microsoft was cooking up its business chat app, Teams, based on more modern tech, which launched in 2017.

"Microsoft has been moving beyond Skype for several years now, with Teams being its strategic voice and video technology for the new era," explained Angela Ashenden, an analyst at CCS Insight.

Teams for all
Under the hood, she said, Teams actually used Skype's technology for a while. It was designed to compete with business app Slack, as a work tool.

But then the pandemic happened.

Zoom, previously a little-known business solution, became a household name overnight. And Microsoft Teams was one of only a handful of competitors ready to take it on.

"As Teams' adoption skyrocketed in the last year, this really sealed Skype's status as a legacy technology for Microsoft," Ms Ashenden said. That has only been reinforced by the launch of a personal version, which could directly compete with Skype.

With that kind of sudden success, it was "inevitable" that Teams would be the Windows default, she added.

"The removal of Skype as a pre-installed app helps reinforce Teams as the preferred solution from Microsoft's perspective, emphasising that this is where its investment will be moving forward."

The writing has been on the wall for a while.

Last September, Microsoft-owned LinkedIn announced it was bringing video meetings to its chat feature using Teams and not Skype, with Zoom and another popular system, BlueJeans, as other options.

In October, senior Microsoft executive Jim Gaynor told CNBC: "If Skype was going to become bigger, this year was the time for it."

"What happened right now was the perfect storm, the perfect set of circumstances for any online communications product. If you cannot significantly grow and make your product flourish and thrive now, forget about it, you're too late now."

'The right solution'
Skype did see growth during the pandemic - reportedly a 70% jump to about 40 million people a day.

But that is still not as big a growth as its competitors. At a time when the entire world needed a calling app, people chose other options.

"There is definitely an argument that the Teams experience is far too complicated for the less-technical non-business user," Ms Ashenden said.

"But if Skype was the right solution for that, we certainly would have seen its usage soaring more over the last year, and we didn't."

Instead, Teams is likely to evolve to make things simpler for personal users -particularly on mobile devices, she added.

But Skype is not being killed off entirely - it will continue to be offered as a download in the Microsoft Store for those who want it in Windows 11.

It won't be alone.

Alongside the announcement of Skype's relegation to the store, Microsoft also announced that some other much-maligned apps were being downplayed or removed.

Its ill-fated Cortana virtual assistant will no longer be pinned to the taskbar; Internet Explorer is disabled by default in favour of the more modern Edge browser; and tools such as OneNote, Paint 3D, and Windows' 3D viewer app are getting the Skype treatment and becoming optional store downloads.