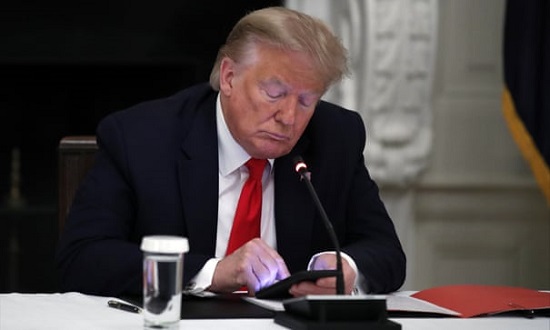 Donald Trumpâ€™s ban from the social media platform Twitter is going to stick even if he runs for the White House again â€“ and even if he won again, a senior executive said on Wednesday.

The former presidentâ€™s permanent block from Twitter is permanent, Twitterâ€™s chief financial officer, Ned Segal, said during an interview on CNBC when he was asked whether Trumpâ€™s tweeting privileges could be restored if he ever returns to power.

He added: â€œWhether youâ€™re a commentator, youâ€™re a CFO, or you are a former or current public official. Remember, our policies are designed to make sure that people are not inciting violence, and if anybody does that, we have to remove them from the service and our policies donâ€™t allow people to come back.â€

The news came as Trumpâ€™s impeachment trial is taking place in the Senate, on a charge that he incited an insurrection with his inflammatory exhortations at a rally in Washington immediately before the breach of the US Capitol by a murderous mob on 6 January.

When he was impeached last year, he tweeted criticism throughout, although then, and now, he declined to appear at the trial in his own defense.

This time around, with Trumpâ€™s Twitter account having fallen silent, the impeachment trial is proceeding without such online heckling.

Only if Trump is convicted at his impeachment can he be barred from holding federal office again, in a subsequent vote. He is free to run for the presidency again if he is, as is likely, acquitted.

Twitter made the unprecedented move to ban Trump from the platform after the Capitol insurrection, with the company saying it was permanently suspending Trump â€œdue to the risk of further incitement of violenceâ€.

Shortly before that, Twitter had already temporarily locked Trumpâ€™s account over several tweets that it said contributed to an elevated risk of violence.