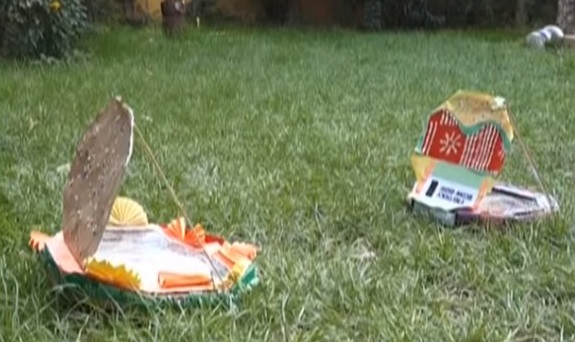 These children between the ages of 8 and 13 said, they came up with the idea in a month after their school tasked them to create something new.

â€œWe wanted to do it because we thought that using coal to power things is harmful to the environment,â€ she said.
The students told Joy News that heavy-duty foil, thermometer, black construction paper and clear plastic wrap, are some of the materials they used with the box to create the solar oven.

â€œThe foil is used to reflect the sun rays into the pizza box, the plastic wrap is for insulation and the black construction paper absorbs the sunâ€™s heat,â€ another student explained.


â€œYou can bake lots of foods like muffins and biscuit and reheat foods like spaghetti, pizza and many others,â€ she added.

However, like any solar machine when there is no sunlight, the oven cannot be used but the students already have plans to improve on the quality and durability of the products.

â€œWe would like to make some changes to the oven because there is a slight problem with the insulation and also we would like to have a battery for it so that on rainy days the oven can still be used,â€ they said.