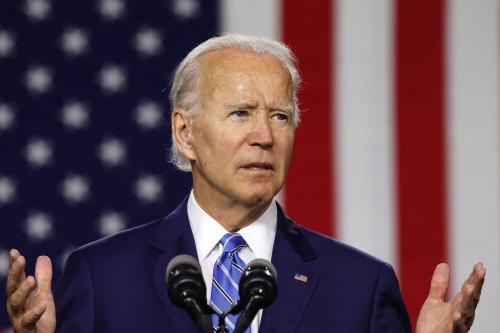 President Joe Biden has signed a raft of executive orders to boost the fight against Covid which has ravaged the US.

Vaccination will be accelerated and testing increased. Emergency legislation will be used to increase production of essentials like masks.

Announcing the 10 measures, Mr Biden said it would take months to defeat the pandemic but America would "get through this" if people stood together.

The moves come a day after Mr Biden was sworn in as the 46th president.

In a break with former President Donald Trump, the policy stresses a national strategy rather than relying on states to decide what is best.

The Trump administration was widely accused of failing to get to grips with the pandemic.

In terms of total deaths from coronavirus, the US is the worst-hit country with more than 406,000 lives lost, according to Johns Hopkins University. Nearly 24.5 million have been infected.

Mr Biden said that the "bold practical steps" that he was taking would not come cheaply.

"Let me be clear - things will continue to get worse before they get better," he said, adding that he expected the number of dead to top half a million by next month.

"This is a wartime undertaking," he said, repeating that more Americans had already died in the pandemic than in the whole of World War Two.

He mentioned the vaccine, saying that its rollout had been a "dismal failure so far", and described his plan for 100 million jabs in his first 100 days in office as "one of the greatest operational challenges our nation has ever taken on".

But when challenged by a reporter who suggested the target might be too low, he snapped back: "When I announced it you all said that it's not possible. Come on. Give me a break, man."

Mr Biden also promised to be transparent about setbacks, and allow scientists to work free from political interference.

"I'm convinced the American people are ready to spare no effort to get this done," he concluded. "We can do this if we stand together."

Later chief medical adviser Anthony Fauci spoke about the vaccine rollout, saying the Biden administration was "amplifying" the programme that was already there.

If, as hoped, 70-85% of the population was vaccinated by the end of summer, there would be "a degree of normality" by autumn, he said.

Dr Fauci said his main concern was persuading people who were sceptical about the vaccine to take it.

He added that the administration was in talks with manufacturers to produce more vaccine, amid reports of supply problems. Some regional officials say they have run out of available vaccine.

About 16.5 million shots have been administered so far.

"The idea that you can get up here and talk about what you know and what the evidence, what the science is... it is something of a liberating feeling," Dr Fauci said, whereas under Mr Trump, "you didn't feel that you could actually say something and there wouldn't be any repercussions".

What's in the plan?

Earlier the administration unveiled a seven-point plan which included efforts to facilitate effective distribution of vaccines and reliable access to testing.

The Trump administration had been criticised for a lack of strategy at the federal level.

"The American people deserve an urgent, robust and professional response to the growing public health and economic crisis caused by the coronavirus (Covid-19) outbreak," an introduction to the plan said.

It said Mr Biden believed the government "must act swiftly and aggressively to help protect and support" essential workers and the most vulnerable.

Although executive orders do not require congressional approval, much of the funding for the planned measures is contained in a huge $1.9tn stimulus package announced by Mr Biden last week.

He will need co-operation from the Senate and House of Representatives for the package to be adopted smoothly.

The aim is to reopen most schools safely within 100 days, and establish vaccine centres at stadiums and community facilities.

International travellers will need to test negative before departing for the US and self-quarantine for 14 days on arrival.

On top of the already announced rules on wearing masks and social distancing on all federal government property, face coverings will become mandatory in airports and on many planes, trains and buses.

There will be more funding for state and local officials to help tackle the pandemic, and a new office will be established to co-ordinate the national response.

The Defense Production Act will be used to speed up production of personal protective equipment and essential supplies needed for vaccine production. Mr Trump used the same piece of legislation to compel the production of items in short supply last year.

In a further break with the previous administration, Dr Fauci said the US would join the Covax scheme designed to deliver Covid vaccines to poor countries.

Speaking by video call to the World Health Organization in Geneva, he also stressed that the US would continue to provide funding for the WHO, in line with Mr Biden's move to reverse Mr Trump's decision to leave.