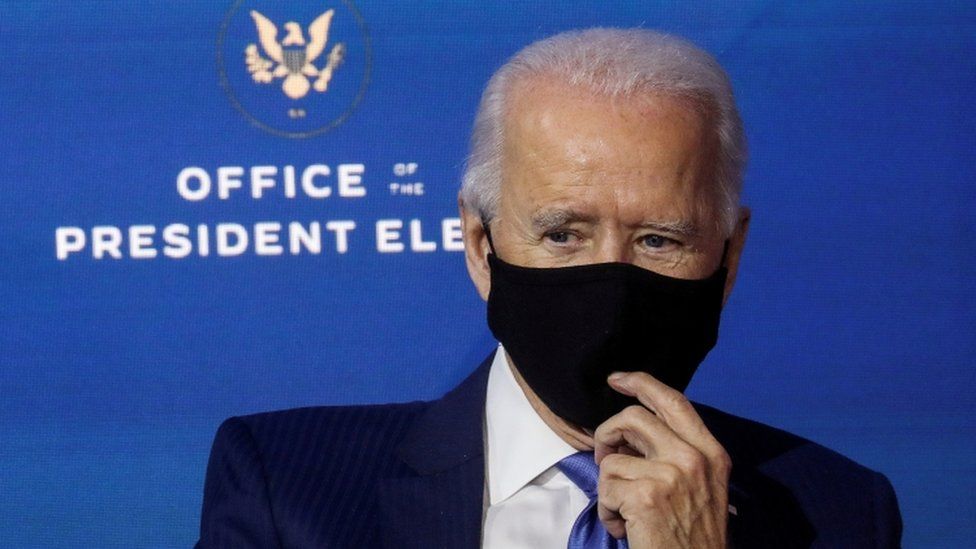 US President-elect Joe Biden has said he will ask Americans to wear masks for his first 100 days in office to curtail the spread of coronavirus.

He told CNN he believed there would be a "significant reduction" in Covid-19 cases if every American wore a face covering.

Mr Biden also said he would order masks to be worn in all US government buildings.

What did Biden say about masks?
In the interview with CNN's Jake Tapper, Mr Biden said: "The first day I'm inaugurated to say I'm going to ask the public for 100 days to mask. Just 100 days to mask, not forever. One hundred days.

"And I think we'll see a significant reduction if we occur that, if that occurs with vaccinations and masking to drive down the numbers considerably."

Constitutional experts say a US president has no legal authority to order Americans to wear masks, but Mr Biden said during the interview he and his Vice-President Kamala Harris would set an example by donning face coverings.

The president's executive authority does cover US government property, and Mr Biden told CNN he intended to exercise such power.

"I'm going to issue a standing order that in federal buildings you have to be masked," he said.

US airlines, airports and most public transit systems already require all passengers and workers to wear face coverings.

The Trump White House has rejected calls from American health experts to mandate masks in transportation as "overly restrictive".

What will happen to Dr Fauci?
In the CNN interview, Mr Biden also said he would retain Dr Anthony Fauci, the top US infectious disease expert, as chief medical adviser to the new administration's Covid-19 team.

In keeping on the public health official who is highly trusted by many Americans, Mr Biden cited the need to convince the public of a new vaccine's safety.

The incoming president also mentioned Dr Fauci's stance that "you don't have to close down the economy like a lot of folks are talking about".

He spoke as California Governor Gavin Newsom issued a stay-at-home order for much of his state, saying he was pulling an "emergency brake" as the virus threatens to overwhelm hospitals. On Wednesday, Los Angeles Mayor Eric Garcetti issued an order restricting all public travel on foot or vehicle, adding: "It's time to cancel everything."

Earlier on Thursday, Dr Fauci apologised in an interview with the BBC for critical remarks he made about the UK's vaccine approval process.

"I did not mean to imply any sloppiness even though it came out that way," he said.

A day earlier, Dr Fauci told US networks that UK regulators had "rushed" the vaccine approval.

What did Biden say about the vaccine?
The Democratic president-elect said he would be "happy" to take a vaccine in public to allay any concerns about its safety.

Three former presidents - Barack Obama, George W Bush and Bill Clinton - have said they are also prepared to be inoculated publicly to show that it is safe.

"People have lost faith in the ability of the vaccine to work," Mr Biden said, adding that "it matters what a president and the vice-president do."

Mr Biden's Vice-President-elect Kamala Harris, who joined him at the CNN interview, received some criticism from Republicans in September after she said she would not trust any vaccine approved by US public health officials during the Trump presidency.

The Pew Research Center says just 60% of Americans are currently prepared to take a coronavirus vaccine, up from 51% who said the same in September.

Mr Biden is preparing to take office as pharmaceutical giants are poised to ship millions of doses of coronavirus vaccines to the American public.

The UK on Wednesday became the first country in the world to approve the Pfizer vaccine for the coronavirus.

What else did Biden and Harris speak about?
In their first joint interview since the election, Mr Biden acknowledged he did not see eye to eye with his deputy on everything.

"When we disagree it will be just like, so far, it's been just like when Barack and I did," said Mr Biden, referring to President Obama, whom he served as vice-president for eight years.

In the CNN interview, Mr Biden laughed when asked whether Mr Trump should attend his inauguration on 20 January, saying it was of "no personal consequence to me".

The Democrat said it was only "important in the sense that we are able to demonstrate the end of this chaos that he's created, that there is peaceful transfer of power with the competing parties standing there, shaking hands and moving on".

The two Democrats were also asked about reports that Mr Trump may issue pre-emptive presidential pardons for his adult children, his lawyer Rudy Giuliani and even himself.

They pledged the justice department under the Biden-Harris administration would be free of any political meddling.

Mr Biden added: "And I guarantee you, that's how it will be run."