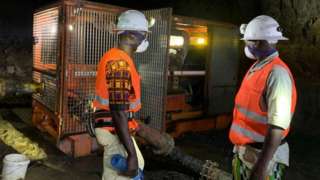 The authorities in Burkina Faso say rescue teams which have been pumping water from a flooded zinc mine are drawing closer to where they’re hoping to find eight workers who’ve been trapped for more than three weeks.

The six Burkina Faso nationals, one Tanzanian and one Zambian went missing on 16 April after heavy rainfall caused flash floods at the Canadian-owned mine, forcing it to suspend operations.

Government spokesman Lionel Bilgo told Reuters that “it’s a race against time” as hopes to find the missing workers were slowly fading.

Mr Bilgo said rescuers remained with about 10 meters of water above a refugee chamber stocked with food and water.

It is hoped the miners were able to gain access into this chamber.

Distraught family members have been gathering at the mine since their relatives were reported missing last month.

A judicial investigation has been launched by the government, while mine managers have been barred from leaving the country while the probe is underway.