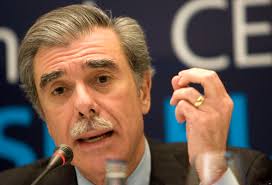 The former commerce secretary under President George W. Bush said he looked at the "totality" of the choice between the two candidates and decided on Clinton.
Â
"I have one resume here for Donald Trump, I have one resume here for Hillary Clinton, and I've chosen this resume," Gutierrez said, indicating Clinton. "I think this person, Hillary Clinton, is the best for the country. I'm not thinking about (it as) a Republican, I'm thinking about (it as) a US citizen. I think at some point, you have to put the party aside and say what's best for the country? I don't want to live in a society that I think Donald Trump will create", he told CNN in an interview.
Â
According to him,Â Clinton would "make a darned good president" based on her "experience," while the thought of a Trump presidency makes him "afraid."
The Republican is a proponent of free trade, something Trump has been strongly against throughout his candidacy. Gutierrez said that the GOP nominee's economic policies would be harmful.
Â
"The economy's important to me. His plan, I love the tax cuts, I'm a Republican, but then he has this sort of import substitution strategy, which is a strategy like an underdeveloped country, very poor countries think that way," Gutierrez said.
Â
"[The idea] that we have to substitute our imports. That would be a disaster."
Gutierrez said he believes Clinton learned during her husband's presidency that cutting the budget deficit, as Bill Clinton did in his second term, drives economic growth.
Â
"I think the one thing the Clintons learned ... is that budget deficits hinder growth, and that's what President Clinton did in his second term, is cut the deficit and that drove the growth. She's learned from that," he said.
Â
Gutierrez added, "I haven't heard an economic concept come out of Trump's mouth except for protectionism and lower taxes. If you put those two together, that is a recipe for disaster."