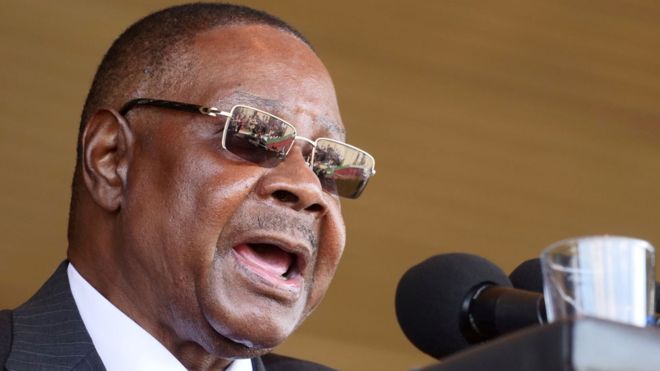 Malawi's president and all government ministers are taking a 10% wage cut for three months to raise money to tackle the coronavirus outbreak.

President Peter Mutharika made the announcement as he set out a stimulus package to help cushion the economic impact of the disease.

Malawi reported its first cases of the coronavirus on Thursday - one of the last countries to do so.

The country, among the world's poorest, has declared a state of emergency.

There is no lockdown but schools are closed and the government says it is urging people to work from home and follow hand-washing and social-distancing guidelines.

All social gatherings of more than 100 people, such as funerals, church services and political rallies, have been banned.

Tobacco markets remain open
Mr Mutharika earns about $3,600 (Â£3,000) a month but no figure was given for how much money would be raised by the pay cut for all ministers.

As part of the stimulus package, the president announced a series of tax breaks for businesses, a reduction in fuel prices and an increase in risk allowances for health workers, Reuters news agency reports.

He also said that an extra 2,000 health workers would be recruited.

Tobacco is Malawi's main export and the president said that all tobacco markets would remain open to maintain foreign currency earnings and keep farmers in business, Reuters reports.

The four confirmed cases so far have all been linked to people travelling from the UK.

Mr Mutharika, 79, became president in 2014. His re-election last year was cancelled in February after judges found there had been widespread irregularities.