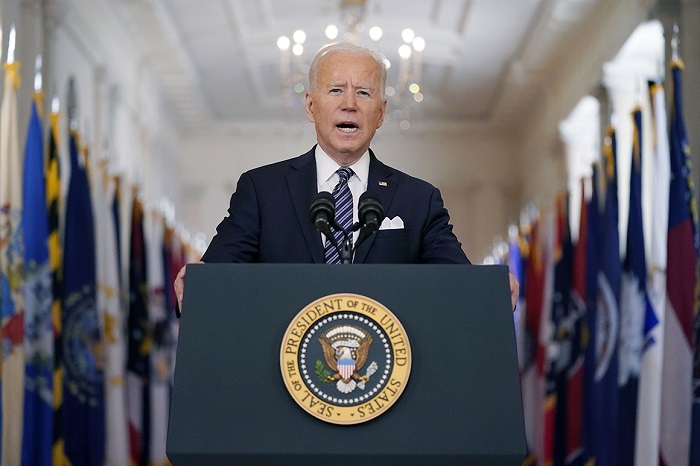 President Joe Biden has said he is hopeful that America can "mark independence" from Covid-19 on July 4 if people get vaccinated.

In his first primetime address as president, Mr Biden said he would order states to make all adults eligible for vaccinations by 1 May.

Mr Biden was speaking exactly a year to the day after the outbreak was classified a global pandemic.

Half a million Americans have died.

This time last March, all US major sport was cancelled and actor Tom Hanks announced he had caught the virus. Then-President Donald Trump suspended travel from Europe, and also said he hoped the US would be open again for Easter.

In his speech President Biden also eyed an important date in the calendar for when small groups could get together again.

"If we do this together, by 4 July, there is a good chance you, your family and friends can get together in your backyard or in your neighbourhood and have a cookout or a barbecue and celebrate Independence Day," Mr Biden said.

He added that the country would be able to not only celebrate Independence Day but also "independence from this virus".

As part of the plans to expand vaccinations, the number of places where people can be immunised will be increased with veterinarians and dentists among those also allowed to vaccinate people.

Mobile units will travel into local communities to provide vaccinations in underserved communities, the president said.

Mr Biden set a target of 100 million vaccinations by his 100th day in office but in his address, he said this target would be reached on day 60.

Despite the good news, he warned that the "fight is far from over". "This is not the time to let up," he added.

He called on people to maintain social distancing measures, hand washing and wear a mask.

"Beating the virus and getting back to normal relies on national unity," he said.