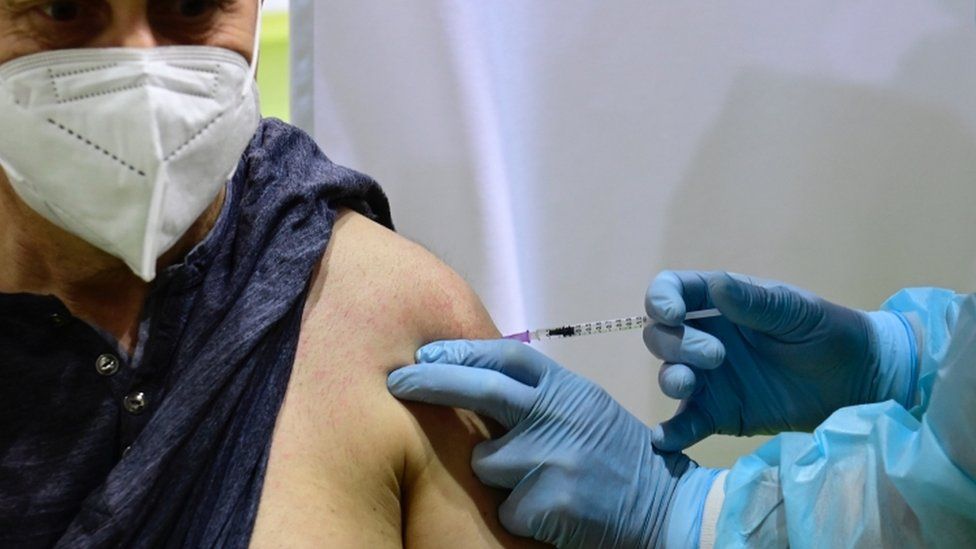 The World Health Organization (WHO) has urged countries not to pause Covid vaccinations, as several major EU member states halted their rollouts of the Oxford-AstraZeneca jab.

It said there was no evidence of a link between the vaccine and blood clots.

Germany, France, Italy and Spain joined smaller nations in halting vaccinations as a precaution while checks are made.

The WHO's vaccine safety experts are meeting on Tuesday to discuss the jab.

The European Medicines Agency (EMA) will meet on the same day and is due to draw conclusions on Thursday. It has also said the vaccine should continue to be used.

There have been a number of cases in Europe of blood clots developing after the vaccine was administered.

However, experts say these were no more than the number of blood-clot incidents typically reported within the general population.

About 17 million people in the EU and the UK have received a dose of the vaccine, with fewer than 40 cases of blood clots reported as of last week, AstraZeneca said.

What measures are being taken?
Germany's health ministry announced on Monday that it would stop administering the Oxford-AstraZeneca vaccine with immediate effect, on the recommendation of the Paul Ehrlich Institute (PEI), the country's authority on vaccines.

"In light of these newly reported cases, the Paul Ehrlich Institute today re-evaluated the situation and recommended a suspension of vaccinations and further analysis."

He said the decision was "not political". "All of us are very aware of the consequences of this decision, and we did not take this decision lightly," he added.

Shortly afterwards, French President Emmanuel Macron said France was suspending the vaccine until new advice was given by the EMA.

"We have a simple guide, to be informed by science and the competent health authorities and to do it as part of a European strategy," he said.

And Italy's medicines agency extended a ban introduced on individual batches of the vaccine throughout the country, also pending the EMA decision.

Spanish Health Minister Carolina Darias said use of the vaccine would be suspended there for at least two weeks.

The suspensions came less than a day after the Netherlands did the same. Its suspension will last until at least 29 March.

The Irish Republic, Portugal, Denmark, Norway, Bulgaria, Iceland and Slovenia have also temporarily halted inoculations with the vaccine, while the Democratic Republic of Congo and Indonesia have postponed the launch of their rollouts.

Several European countries, including Austria, have suspended the use of certain batches of the drug as a precautionary measure.

However, Belgium, Poland, the Czech Republic and Ukraine said they would continue to administer the AstraZeneca vaccine.

Belgian Health Minister Frank Vandenbroucke said that, with a high number of cases currently, Belgium could not afford to interrupt the rollout.

"For us, the balance is clear and clean, it's a race against time," he said.

Thailand announced that it would start using the vaccine on Tuesday, following a brief delay to the rollout over safety concerns.

Canadian Prime Minister Justin Trudeau said health experts had assured him all vaccines being administered in the country, including AstraZeneca's, were safe.

What do the WHO and other experts say?
WHO spokesman Christian Lindmeier said the body was investigating the reports.

"As soon as WHO has gained a full understanding of these events, the findings and any unlikely changes to current recommendations will be immediately communicated to the public," he said.

"As of today, there is no evidence that the incidents are caused by the vaccine and it is important that vaccination campaigns continue so that we can save lives and stem severe disease from the virus."

The EMA - which is also currently carrying out a review into incidents of blood clots - said the vaccine could continue to be administered.

The UK medicines regulator also said evidence "does not suggest" the jab causes clots, as it urged people in the country to get the vaccine when asked to do so.

Professor Andrew Pollard, director of the Oxford vaccine group that developed the Oxford-AstraZeneca jab, told the BBC's Today programme there was "very reassuring evidence that there is no increase in a blood clot phenomenon here in the UK, where most of the doses in Europe [have] been given so far".

line
Right to ask questions
Analysis box by Michelle Roberts, health editor
While vast numbers of people are being vaccinated at pace around the world, some of them will still get sick with other things unrelated to the vaccine.

These pauses for the AstraZeneca vaccine are not because it is unsafe to give. It's to allow time for experts to explore why a small number of people who were recently given the shot also developed blood clots.

When an illness occurs shortly after vaccination, it is right to question whether the shot might have contributed in any way.

There is no indication or evidence, however, that the vaccine was linked or responsible.

In the UK, more than 11 million people have already received at least one dose of the AstraZeneca vaccine and there has been no sign of excess deaths or blood clots occurring. Europe's drug regulator has also backed the vaccine, saying its benefits are clear. Covid can be deadly and vaccination saves lives.

line
What did AstraZeneca say?
It said there was no evidence of an increased risk of clotting due to the vaccine.

It said that across the EU and United Kingdom there had been 15 events of deep-vein thrombosis (DVT) - a blood clot in a vein - and 22 events of pulmonary embolism - a blood clot that has entered the lungs - reported among those vaccinated.

AstraZeneca said these figures were "much lower than would be expected to occur naturally in a general population of this size and is similar across other licensed Covid-19 vaccines".

"The nature of the pandemic has led to increased attention in individual cases and we are going beyond the standard practices for safety monitoring of licensed medicines in reporting vaccine events, to ensure public safety," Ann Taylor, the firm's chief medical officer, said.