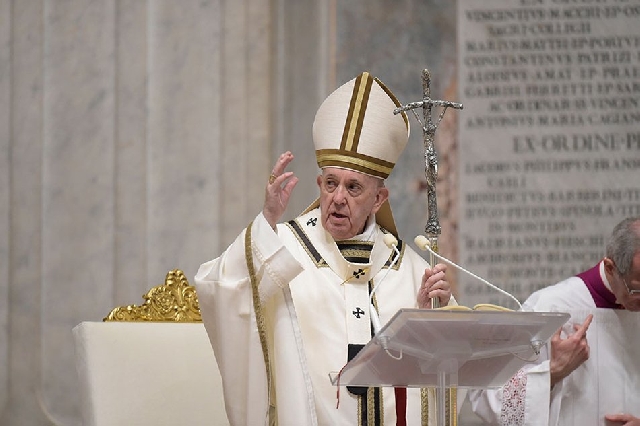 Pope Francis has urged people not to "yield to fear" over coronavirus, calling on them to be "messengers of life in a time of death".

The leader of the Roman Catholic Church was speaking at his Easter vigil service on Saturday evening in an almost empty St Peter's Basilica.

Members of the world's 1.3 billion Catholic community could follow a live stream of the service.

Lockdown measures are still in place across Italy, hard hit by the pandemic.

Prime Minister Giuseppe Conte praised the Pope for his "gesture of responsibility" in marking Easter without a congregation.

Christians around the world are celebrating Easter, the most important festival in the Christian calendar, despite the restrictions that have left hundreds of millions confined to their homes. Many priests are conducting services in churches without congregations.

Pope Francis recalled the Biblical account of a woman finding Jesus's tomb empty on the day Christians believe he rose from the dead.

"Then too, there was fear about the future and all that would need to be rebuilt. A painful memory, a hope cut short. For them, as for us, it was the darkest hour," he said.

"Do not be afraid, do not yield to fear: this is the message of hope. It is addressed to us today," he added.

His service, normally held in front of thousands of worshippers, was attended by only around a couple of dozen people. Several traditional features were also scaled back, including the baptism of converts.

On Sunday, the Pope will give his Easter Sunday address at a ceremony behind closed doors. Historically it has been given to crowds in St Peter's Square.