Covid: New local lockdown restrictions in England to be unveiled 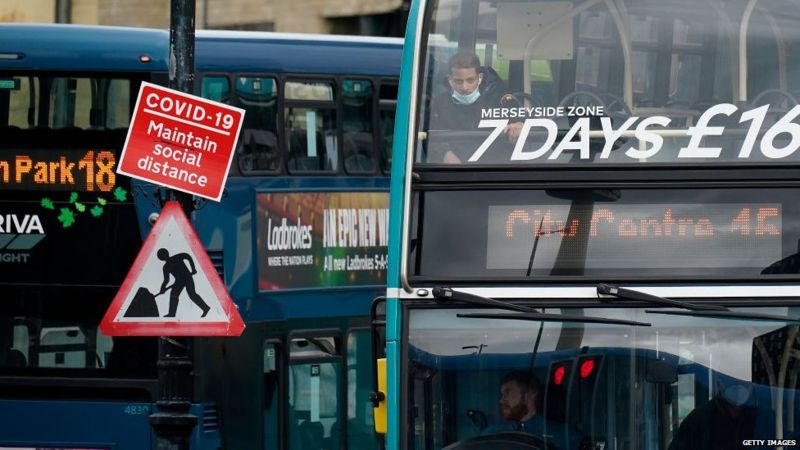 New local lockdown rules for England are due to be announced later.

The Liverpool City Region is expected to face the tightest restrictions under a new "three tier" system, which will classify regions as being at a "medium," "high" or "very high" level of alert.

But Steve Rotheram, the city region's mayor, said "no deal has been agreed".

Talks between local leaders elsewhere in England and the government in Westminster continue.

More clarity on restrictions is expected later, with new curbs to be reviewed after a month.

Prime Minister Boris Johnson will chair a meeting of the emergency Cobra committee "to determine the final interventions".

He will then announce changes in the Commons, before speaking at a Downing Street press conference in the evening.

The prime minister is expected to be joined by Chancellor Rishi Sunak and England's Chief Medical Officer Prof Chris Whitty.

Under the new system, Tier 3 is expected to involve the tightest restrictions.

In a tweet, Mr Rotheram said the government has "been clear from the start" that it plans to place the Liverpool City Region in that category.

"Whilst we have asked for the evidence to support the decision, none has been forthcoming," he said.

"Throughout, we have been clear that new restrictions must come with the financial support to protect local jobs and businesses."

He added: "No agreement has yet been reached on this point and negotiations are ongoing. As in all these things, the devil will be in the detail. A deal is not a deal until it is agreed."

Mr Rotheram has previously warned the government "can't do lockdown on the cheap" and called for a support package for the city region.

He said the government should pay 80% of workers' wages - as was the case under the furlough scheme - if their employers are shut down, rather than the 67% to be paid under the expanded Job Support Scheme.

In a video posted to his Twitter account on Sunday, he warned that the region would not accept a "lower rate" of financial support, especially when it had a "huge, disproportionate number working in the visitor economy - people who are on less than £9 an hour".

A joint statement from Mr Rotheram, Joe Anderson - the mayor of Liverpool (the city, as opposed to the region) - and the leaders of the city region's other authorities reiterated that an economic support package has not yet been agreed.

"If pubs, bars and other hospitality and leisure businesses are forced to close, there must be appropriate support for them and their staff," they said.

They also called for a "clear definition of the exit strategy" from Tier 3.

Monday will mark the start of a distinct new phase in how the pandemic is managed in England.

But it won't quite be like Jeremy Vine dancing around a map on election night and every region going a particular colour immediately.

A picture will emerge relatively quickly, but far from all of it today.

Not least because in the one corner of England where an announcement did look imminent — the Liverpool City Region — there is last-minute delay.

The idea behind the tiers is to make things easier to understand.

But agreeing the tiers and the thresholds between them is difficult, and has taken weeks.

The desire for relative simplicity collides with the reality of complexity: different regions in different circumstances with different leaders.

This new approach sparks countless questions - on what basis will regions be categorised? How clear and public will the criteria be? What will be the exit strategy?

Today should provide some answers, but it won't provide them all.

Presentational grey line
It was thought Manchester may be included in Tier 3, but the BBC understands there have been no contacts between ministers and political leaders in Greater Manchester since Friday night.

Sacha Lord, Greater Manchester's night-time economy advisor, has started legal proceedings to challenge any restrictions on hospitality and entertainment venues in the north of England.

He said there is "currently no tangible scientific evidence to merit a full closure" of the sectors and that local leaders' requests for evidence have been "ignored".

Greater Manchester Police handed out more than 70 fines over the weekend for breaches of coronavirus laws, which included a gathering of up to 100 people.

On Saturday, officers broke up a party of up to 100 students at a property in south Manchester, issuing seven fines and a noise abatement order.