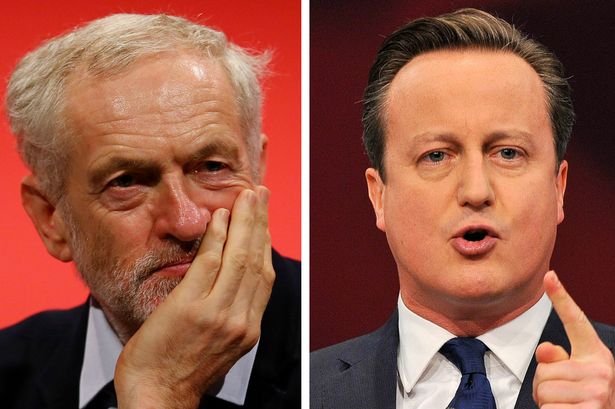 He was hitting back at a jibe from a Labour MP about his mother.

The Labour leader took a few moments to respond as Tory MPs barracked him, before offering some "motherly advice" about standing up for a free NHS.

"My late mother would have said, 'stand up for the principle of a health service free at the point of use for everybody', because that's what she dedicated her life to, as did many of her generation," he said.

The PM later appeared at a Conservative EU rally without a tie or jacket, joking that he had "ignored my mother's own advice".

"What was really noticeable on Monday during the EU statement was that Jeremy Corbyn's top button was not done up, his tie wasn't straight," she told BBC Radio 4's World At One.

"Actually I think there are standards in Parliament. If you bring families or mothers into it you can expect to have a pretty firm bite-back from any politician."

A senior Labour source said: "I think when you are losing an argument, you resort to personal insult. When you are not able to answer questions on the NHS, you resort to silly insults. It's got no place in politics."

The source said Mr Corbyn had "several suits", adding: "I don't think he will be taking sartorial advice from David Cameron or his mother."

Mr Cameron's mother Mary hit the headlines earlier this month after signing a petition against cuts to children's centres in his constituency.

The two leaders were arguing about the junior doctors dispute when they began trading jibes about what their mothers would say.

Mr Corbyn asked if the PM would be "writing another letter to himself, asking on behalf of his constituents asking for the health secretary to intervene and support his local NHS?"

The prime minister was heckled by Labour MPs as he made his reply, with one shouting "ask your mother".

"I think I know what my mother would say. I think she would look across the despatch box and she would say 'Put on a proper suit, do up your tie and sing the national anthem'."

But Labour MPs on twitter accused him of making a personal attack and of bringing Prime Minister's Questions to a "new low".

Lib Dem leaderÂ Tim Farron tweeted: "When #PMQs descends into a series of 'Your mum' comments it shows all politicians up. It's school-ground antics that demeans."