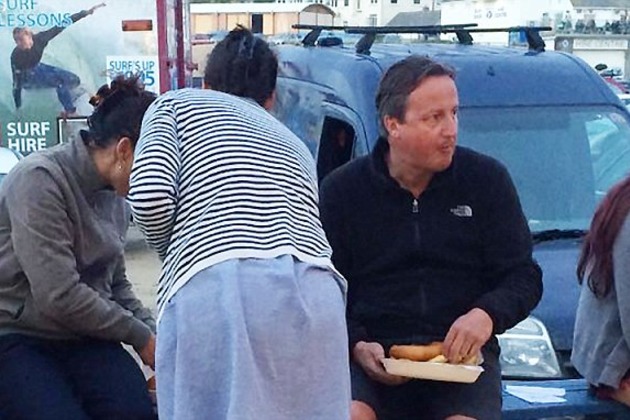 A couple of months ago he was the most powerful man in the country, followed everywhere he went by a retinue of aides and a jostling pack of news-hungry reporters and cameramen.

Today David Cameron is a 49-year-old at a loose end, snapped this week sitting barefoot on a car-park wall in Cornwall, eating fish and chips and staring abstractedly into the middle distance.

Eating with him is a woman presumed to be his wife (though her face is obscured by somebodyâ€™s back), while three apparent strangers sit slap beside the couple, seemingly unaware that they are just inches away from the man who was so recently the Prime Minister of the United Kingdom.

Doesnâ€™t that photograph, taken by a passer-by on Tuesday evening, speak more than words can say about the drama of this summer, the instantaneous changes of fortune we witnessed after the referendum and the sheer ruthlessness of our political system?

Mind you, Iâ€™m not complaining. I reckon Mr Cameron richly deserved his nemesis after his hubristic campaign, which he was so sure he would win before panic set in and he tried to terrify us with wild scaremongering over the perils of Brexit.

Itâ€™s also a thoroughly healthy aspect of British democracy that we make so little fuss over our former leaders when they fall from power. Itâ€™s a salutary reminder to their successors that the electorate giveth and the electorate taketh away.

Can you imagine a former president of the United States sitting on a wall within weeks of his departure from office, buttock-to-buttock with strangers minding their own business? The American secret service surely wouldnâ€™t allow it. And unlike, say, Bill Clinton, who can call himself President Clinton for life, former British prime ministers donâ€™t even get to keep their old job title when theyâ€™re ousted.

No doubt police bodyguards were keeping a discreet eye on the Camerons as they ate their fish and chips in Polzeath. Itâ€™s also possible that the three women sitting with them on the wall may have recognised the couple. But if so, they were either too courteous to show any sign of it â€” or else they were remarkably unimpressed.

Looking at this photograph, I canâ€™t say Iâ€™m surprised. Indeed, it has set me thinking that if there really is such a thing as an aura of power â€” and Iâ€™m inclined to believe there is â€” Mr Cameron appears to have left his behind in Downing Street when the removal men took his other possessions away.

Of course, it may be foolish to read too much into a single image, snapped when the sitter wasnâ€™t expecting it. But to me, Mr Cameron looks diminished and deflated, a shadow of his former self â€” if not in girth, then at least in the sense of authority and self-confidence he exuded when he held the reins of government.

This has nothing to do with his bare feet or the holiday outfit heâ€™s wearing â€” the shorts and the zipped-up fleece. Indeed, weâ€™ve seen him similarly attired, and in the same Polzeath location, many times before. Weâ€™ve also seen him, in all those carefully staged photo-opportunities of the past, with his entourage kept out of camera-shot.

The difference is that from the moment he walked into Number 10, he looked like a Prime Minister â€” even when he was dressed for a holiday photoshoot like a complete wally. There was something about his demeanour and strong physical presence that said here was a leader, at ease with himself, used to being listened to and getting his way. Indeed, it was one of his strengths as PM that he looked the part.

In this, he differed from some of his predecessors, who always looked and sounded as if they had been miscast for the top job.

Sir John Major springs to mind. Even after more than six years in Downing Street, he retained the air of a middle-ranking local government officer, while Gordon Brown appeared more like an eccentric, irascible schoolmaster than a head of government.

Meanwhile, other former prime ministers kept their air of authority long after they left office. Margaret Thatcher, I can testify, was quite as formidable a character after she was knifed by her colleagues as before. And although it grieves me to say it, even the egregious, self-deluding Tony Blair still gives off a certain aura â€” albeit mixed with a powerful whiff of sulphur.

Of course, youâ€™d be more likely to find him digging into the caviar on a crooked oligarchâ€™s yacht than sitting on the wall of a Cornish car park, eating chips. But wherever Mr Blair happens to be, you can be sure he is noticed by everyone around him.

Not so Mr Cameron. Whatever intangible quality of leadership he may have possessed until a couple of months ago seems to have disappeared along with the trappings of his office.

And though he hummed a nonchalant tune as he turned away from the lectern after announcing his resignation, Iâ€™ll bet heâ€™s missing the job â€” and everything that goes with it â€” far, far more than his pride will allow him to admit.

On June 23 he went to bed, recently re-elected with an overall majority and no opposition worthy of the name, looking forward to four years in which to stamp the name Cameron indelibly on the history books. But when he woke up the next morning, he was finished â€” washed up at 49, with only a couple of bodyguards to remind him that once he was a power in the land.

How could he feel anything but bitterly frustrated, after the suddenness of his fall, by the near certainty that nothing he can do in the years remaining to him will be anything like as exciting as the life he has lived for the past six?

Politicians may tell you they relish the chance to spend more time with their families and long for the day when they can escape from the media spotlight. But donâ€™t you believe them.

Power and attention become an addiction â€” and their loss as painful as cold turkey to a junkie denied his fix.

What can Mr Cameron look forward to now? If he is half the man I think he is, he wonâ€™t do a Tony Blair. Yes, there will be plenty of directorships offered â€” and some, no doubt accepted. But I canâ€™t see him jetting off around the world, sucking up to any old tyrant prepared to pay for his contacts in hard cash. His pride and sense of propriety surely wouldnâ€™t permit it.

More likely, I reckon, he will stay on in the Commons to show that when he preached about public service and the Big Society, he meant what he said (even if, in the latter case, some of us werenâ€™t quite sure what that was). Perhaps he will even take another government job one day. It will be a waste of his talent, if not.

As for his record as Prime Minister, I wonder what he thinks as he tucks into his fish and chips?

True, he can pride himself on having been an able chairman of the Coalition, keeping the show on the road when the country seemed to be heading for the cliff edge (though for my taste, he didnâ€™t fight nearly hard enough for Tory election commitments). And yes, progress was made under his leadership on welfare and education.

But otherwise, what? Gay marriage? A plague of hideous wind farms (before he wisely â€˜cut the green c**pâ€™)? Itâ€™s not much to show, is it, for six years at the helm?

There is one thing, however, for which I reckon posterity will bless him. He may not thank me for pointing this out, and it is not what he intended. But Mr Cameronâ€™s true and lasting legacy is that he was the man who called the EU referendum and offered us our escape from a doomed superstate.

One day, he himself may even come to realise that, quite by accident, he performed a wonderful service for our country. 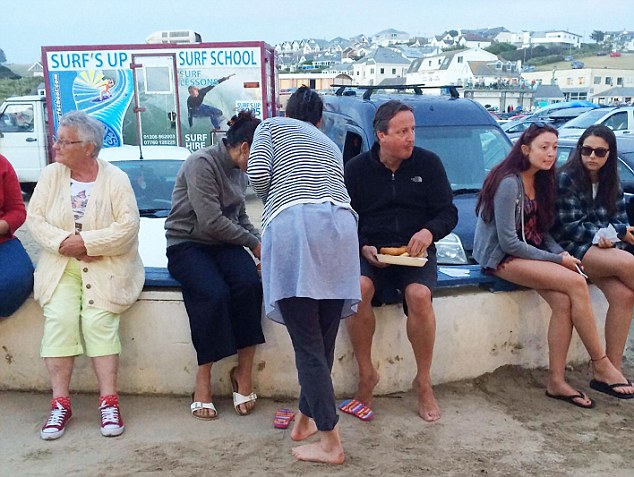