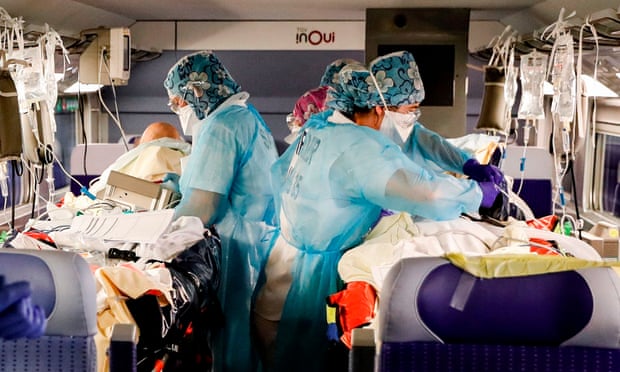 Covid-19 infections are nearing the one million mark after â€œnear exponential growthâ€ saw global cases more than double in the past week.

The World Health Organization chief, Tedros Adhanom Ghebreyesus, warned of the approaching milestone as new cases reached almost every country and territory across the world.

â€œAs we enter the fourth month since the start of the Covid-19 pandemic Iâ€™m deeply concerned about the rapid escalation and global spread of infection,â€ Tedros said.

â€œOver the past five weeks, we have witnessed a near exponential growth in the number of new cases, reaching almost every country.

â€œThe number of deaths has more than doubled in the past week. In the next few days we will reach one million confirmed cases and 50,000 deaths.â€ The total number of cases on Thursday was just below 936,000 with more than 47,000 deaths.

On Wednesday evening, Donald Trump warned of â€œdifficult daysâ€ for the US, saying: â€œWe are going to have a couple of weeks, starting pretty much now, but especially a few days from now, that are going to be horrific.â€

He again questioned Chinaâ€™s reported numbers on the virus: â€œThe numbers seem to be a little bit on the light side â€“ and I am being nice when I say that â€“ relative to what we witnessed and what was reported.â€

The comments followed a Bloomberg news story that said a classified US intelligence report had concluded that China had under-reported the total cases and deaths it had suffered. On Wednesday â€“ the last day of available figures â€“ China reported 82,361 confirmed cases and 3,316 deaths.

Trumpâ€™s warning came as the Federal Emergency Management Agency (FEMA) reportedly asked US defence agencies for 100,000 body bags, for use by civilian authorities. The White House has previously said deaths could reach 240,000.

The rapid growth in the number of infections has overwhelmed hospitals in many cities. A week ago the US Centers for Disease Control said there were 85,000 cases. That means recorded cases have grown by two and a half times in a week, and up from 15,219 two weeks ago.

While some countries, like Australia, have drawn some solace from the fact that the vast majority of cases are in returning travellers, or their contacts, the CDC says only 2% of US cases have been identified as travel-related or connected to those travellers. Ninety-eight per cent of cases in the US were still under investigation.

Identifying asymptomatic cases of the virus in the US may prove a crucial challenge in overcoming the pandemic, including separating out patients who are were not showing symptoms at the time of the test (who are classed as pre-symptomatic) from those who never get symptoms.

The US CDC has warned that up to 25% of people with Covid-19 may be asymptomatic, leading the organisation to consider broadening its guidelines on who should wear face masks.

â€œThis helps explain how rapidly this virus continues to spread across the country,â€ the CDC director, Dr Robert Redfield, told National Public Radio on Monday.
Previously, the CDC and WHO have recommended that only people who are sick wear masks. On Wednesday, the Los Angeles mayor, Eric Garcetti, asked citizens to wear face masks when leaving the house.

In Europe, the three worst-affected countries â€“ Italy (110,000), Spain (104,000) and Germany (78,000) â€“ represent just under a third of the confirmed cases worldwide, according to Johns Hopkins University figures. Their combined death tolls make up 44% of fatalities worldwide.

Three weeks into their lockdown fears grew in Italy over social unrest. Tensions in some of the poorest southern regions of Campania, Calabria, Sicily and Puglia mounted, as people in some areas began to run out of food and money.