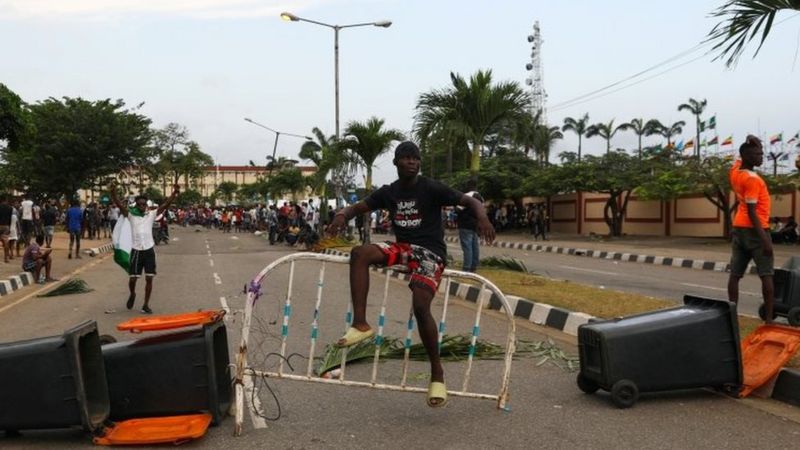 A number of people taking part in a protest against police brutality have reportedly been shot dead or injured in Nigeria's biggest city, Lagos.

A witness told the BBC he had counted about 20 bodies and at least 50 injured after soldiers opened fire. Amnesty International said it had obtained credible reports of deaths.

The authorities have promised an investigation into the shooting.

An indefinite 24-hour curfew has been imposed on Lagos and other regions.

Protests over a now-disbanded police unit, the Special Anti-Robbery Squad (Sars), have been continuing for two weeks.

Reacting to the shootings in Lagos, former US Secretary of State Hillary Clinton called on Nigerian President Muhammadu Buhari and the army "to stop killing young #EndSARS protesters".

Nigerian footballer Odion Jude Ighalo, who plays for Manchester United, accused the Nigerian government of killing its own citizens. "I'm ashamed of this government," he said in a video posted on Twitter.

What do we know about the shooting?
Eyewitnesses spoke of uniformed men opening fire in the wealthy Lekki suburb of Lagos on Tuesday evening.

An unnamed eyewitness told BBC News: "At exactly 6.45pm [local time] the soldiers pulled up... and they started firing directly at we, the peaceful protesters.

"They were firing and they were advancing straight at us. It was chaos. Somebody got hit straight beside me and he died on the spot.

"It was pandemonium and they kept on shooting and shooting at us. It lasted for about an hour and a half and the soldiers were actually taking up the dead bodies."

He said the soldiers had built a barricade and ambulances could not reach the protest area.

Four witnesses told Reuters news agency soldiers had opened fire on demonstrators. One of them, Alfred Ononugbo, 55, said: "They started firing ammunition toward the crowd. They were firing into the crowd. I saw the bullet hit one or two persons."

In a tweet, Amnesty International Nigeria said it had "received credible but disturbing evidence of excessive use of force occasioning deaths of protesters at Lekki toll gate in Lagos".

Amnesty International spokesman Isa Sanusi later said: "People were killed at the tollgate by security forces... we are working on verifying how many."

How have the authorities reacted?
Gboyega Akosile, a spokesman for the Lagos state governor, tweeted: "There have been reports of shooting at the Lekki Toll Plaza, following the 24-hour curfew imposed on Lagos State to stop criminals who hid under the #EndSARS protests to unleash mayhem on innocent citizens."

He said the state authorities had ordered an "investigation into the incident".

Approached by Reuters for comment, a Nigerian army spokesman did not immediately respond.

How did the unrest begin?
Protests began nearly two weeks ago with calls for the Sars, which had been accused of illegal detentions, assaults and shootings, to be disbanded.

But the demonstrators called for more changes in the security forces as well as reforms to the way the country is run.

Lagos state Governor Babajide Sanwo-Olu has said that criminals have hijacked the protests.