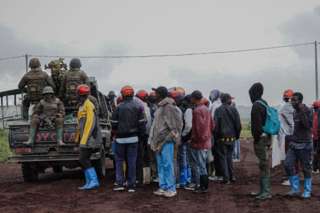 Rebels in eastern Democratic Republic of Congo have retreated from areas they recently captured in clashes with government forces in North Kivu province.

The fighting displaced more than 100,000 people in the province, but local media report that many locals are now returning to their homes in Rutshuru and Nyiragongo areas.

A spokesperson for the M23 rebels, Major Willy Ngoma, has told the BBC that “we have left those areas in order to make peace”.

The rebels had advanced to about 20km (12 miles) from the provincial capital, Goma.

It is not clear where they retreated to, but the UN-sponsored Radio Okapi reports that they went to positions close to the border with Rwanda.

On Monday, government spokesperson Patrick Muyaya had ruled out the possibility of talks with the rebels, terming them "terrorists”.

“What would be the essence of talks with a terrorist group? There’s no more room for talks,” Mr Muyaya said.

But the rebels' spokesperson said the designation of M23 as a terrorist group made no difference.

“Calling us so is meaningless, it is only what they [government] think”, Major Ngoma told the BBC Great Lakes.

The Congolese government in April excluded M23 from negotiations held in Kenya with dozens of rebel groups, accusing the group of staging hostilities just before the talks.

The negotiations have not resulted in any decision yet and are scheduled to resume in Goma town.