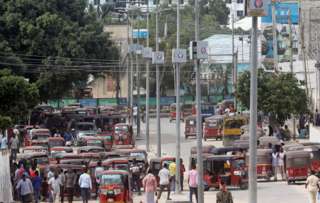 Somalia's President Mohamed Abdullahi Farmajo has backed down from his attempt to extend his tenure for two years - a political move that had sparked clan-based fighting in Mogadishu between soldiers supporting and opposing him.

In a broadcast address to the nation, he called for a new presidential election and commended the efforts of his prime minister, who hours earlier had denounced Mr Farmajo's bid to cling to office after his term expired in February.

Mr Farmajo said he would appear in parliament on Saturday to restore the 17 September 2020 deal on a proposed electoral framework, which would reverse the two-year extension of his term passed by legislators on 12 April.

The 2020 agreement refers to a process under which clan elders select delegates to electoral colleges, which in turn choose federal lawmakers who then pick a president.

"I wish to reaffirm, like I have done in the past, that we have always been ready to ensure election takes place Somalia more so, in a timely and peaceful manner," he said.

The president also urged security agencies to ensure the safety of civilians and avoid "any actions that may lead to insecurity" for the stability of the nation.

Civilians have been fleeing the violence and there have been fears that al-Shabaab Islamist militants would exploit the security vacuum.