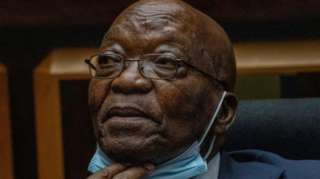 Several roads have been closed to the public around a Pietermaritzburg court as the corruption trial of former South African President Jacob Zuma resumes on Monday.

Mr Zuma faces multiple charges of fraud, racketeering and money-laundering relating to a 1990s arms deal with a French company.

He says the charges are a witch-hunt by political rivals.

Last July, violent protests broke out in parts of South Africa after Mr Zuma was arrested in a separate case.

On Monday, Mr Zuma’s lawyers will respond to the prosecution's affidavit, which seeks to introduce new evidence.

He has also applied to have the supreme court reconsider appeals rejected in March that sought the removal of the lead prosecutor citing bias.

The former president is accused of having received kickbacks in the 1990s in a $2bn (£1.5bn) arms deal with several European companies.

He is charged alongside French company Thales. Both deny the charges.

Mr Zuma also intends to proceed with a private prosecution of the lead prosecutor.