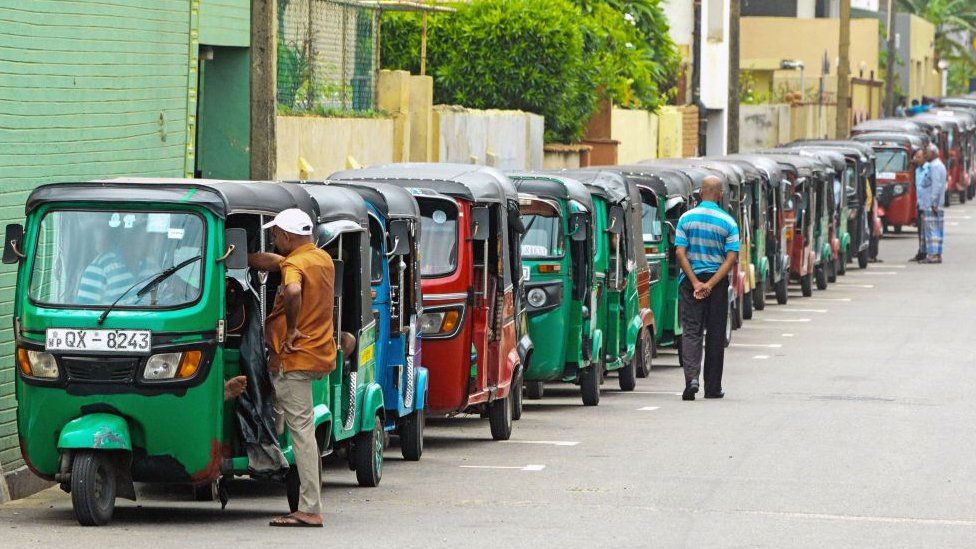 Sri Lanka's energy minister has issued a stark warning over the country's fuel stocks as it faces its worst economic crisis in more than 70 years.

On Sunday, Kanchana Wijesekera said the nation only had enough petrol left for less than a day under regular demand.

He also said its next petrol shipment was not due for more than two weeks.

Last week, Sri Lanka suspended sales of petrol and diesel for non-essential vehicles as it struggles to pay for imports like fuel, food and medicines.

Mr Wijesekera told reporters that the country had 12,774 tonnes of diesel and 4,061 tonnes of petrol left in its reserves.

"The next petrol shipment is expected between the 22nd and 23rd [of July]," he added.

A shipment of diesel is expected to arrive at the weekend, however Mr Wijesekera warned that the country does not have enough money to pay for planned fuel and crude oil imports.

He said Sri Lanka's central bank could only supply $125m for fuel purchases, far less than the $587m needed for its scheduled shipments.

Mr Wijesekera added that the country owed $800m to seven suppliers for purchases it made earlier this year.

It came after Sri Lanka banned sales of fuel for private vehicles until next week.

Experts believe it is the first country to take the drastic step of halting sales of petrol to ordinary people since the 1970s oil crisis, when fuel was rationed in the US and Europe.

The island nation of 22 million people is facing its worse economic crisis since gaining independence from the UK in 1948 as it lacks enough foreign currency to pay for imports of essential goods.

Acute shortages of fuel, food and medicines have helped to push up the cost of living to record highs in the country, where many people rely on motor vehicles for their livelihoods.

Sri Lanka hasn't completely ground to a halt yet, but it is precariously close to seizing up.

Crucial to the crisis-hit nation's economy is the ability to earn significant amounts of foreign currencies.

For this reason some export-driven industries have been helped to keep going by the government.

Textile and clothing manufacturers have at times been granted fuel supplies to power their machinery and transport goods. But that's also drying up now.

At the same time tourism, which had been the country's single biggest revenue generator, has seen bookings plunge 60%.

Something not helping that is the almost total collapse of the local transport system.

Taxis and the ubiquitous three-wheeled tuk-tuks are now only seen in seemingly endless queues at petrol stations.

It's probably for the best then that people who would normally commute to their employer's offices have been told to work from home.

Meanwhile, the IT industry, which is still developing in the country, has also been heavily affected as firms face power cuts and internet outages.

All of this has prompted concerns of a so-called "brain drain", with fears that large numbers of young professionals could leave the country.

While Sri Lanka's present is difficult enough, yet more challenges lie ahead in the future.

While no agreement has been reached yet, the team said in a statement that it had made "significant progress on defining a macroeconomic and structural policy package".

It added that it had "witnessed some of the hardships currently faced by the Sri Lankan people, especially the poor and vulnerable who are affected disproportionately by the crisis".

The cash-strapped country has also sent officials to the major energy producers Russia and Qatar in an attempt to secure cheap oil supplies.