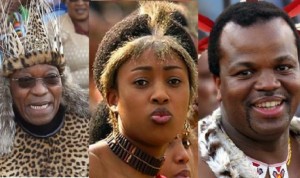 King Mswati III, who is famously known for his controversial bride selection has decided to honour South African President Jacob Zuma with a â€œbeautiful gift.â€ Mswati usually selects a wife during the Reed Dance ceremony, known as Umhlanga which reveals thousands of Swazilandâ€™s â€˜prettiest virginsâ€™ dancing topless for King Mswati III, every year.

Reports from Swaziland are suggesting that King Mswati III will invite his South African â€˜friendâ€™ to the next ceremony so that he can also taste the sweetness of Swazi fruits. Both leaders have similar â€˜marital policiesâ€™ which do not forbid them from marrying as many wives as they can. King Mswati currently has 15 wives whilst Zuma is trailing with four, having married six times.

It is reported that an envoy will be sent to meet President Zuma at his Nkandla rural home and possibly make arrangements for the event. â€œThis yearâ€™s ceremony will be bigger and better, we are inviting Heads of States, and President Zuma of South Africa is one of the guests who will be invited,â€ said a source quoted online.

Whether â€œThe Zulu Kingâ€ will accept the offer to choose a virgin among thousands remains a mystery. There are no confirmations from people close to the President. President Jacob Zuma hinted he may be ready to take a fifth wife to accompany him through old age.

The Star reported in 2014 that during a visit to a Durban township yesterday in KwaZulu-Natal, the 72-year-old said in isiZulu â€œAngakayakhi indlu yokugugela â€¦ laba ngisabathathile njeâ€ (I do have wives but Iâ€™m yet to marry my last one).

Sihawu Ngubane, a professor at KwaZulu-Natal University, was quoted by the newspaper as saying it was fairly standard among Zulu people for a man who practices polygamy to take a last wife for his last years, sometimes the younger sister of one of his wives.

â€œThey call the last wife â€˜indlu yokugugelaâ€™ [the home in which I will age] because the responsibility of looking after the husband in their old age predominantly lies with the junior wife, who is often younger than the other wives and more agile in case there is an emergency,â€ he said.

Zuma, who has about 20 children, has married six times but currently has four wives on the stateâ€™s budget, despite criticism from some taxpayers reports dailytimes.co.za.