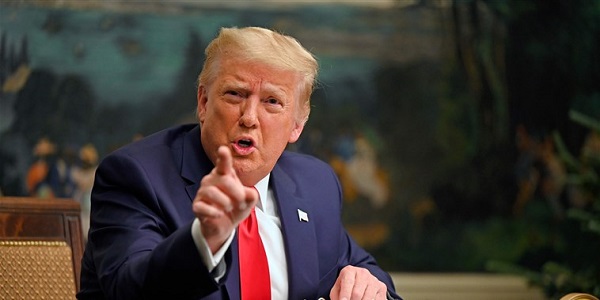 A US federal appeals court has firmly rejected the Trump campaign's attempt to block President-elect Joe Biden from being declared winner in Pennsylvania.

The panel of three judges deemed the case was without merit, saying the Trump campaign had not made specific allegations or provided proof.

The ruling is another major setback for President Trump in his attempts to overturn the 3 November election.

On Thursday he said he would give way if Mr Biden was declared the winner.

READ ALSO: US election: Trump signals he is prepared to leave White House

But on Friday he again made unfounded allegations of "massive voter fraud", tweeting: "Biden can only enter the White House as President if he can prove that his ridiculous '80,000,000 votes' were not fraudulently or illegally obtained."

What did the appeals court rule?
The 3rd Circuit Court of Appeals had been asked to consider a lower court's decision to dismiss the Trump campaign's attempts to invalidate millions of mail-in votes in Pennsylvania.

The lower court ruling had paved the way for the battleground state to certify Joe Biden's win, giving him 20 vital electoral college votes and effectively the presidency.

In giving the appeal court's opinion, Judge Stephanos Bibas wrote: "Free, fair elections are the lifeblood of our democracy. Charges of unfairness are serious. But calling an election unfair does not make it so."

"Charges require specific allegations and then proof. We have neither here," wrote Judge Bibas, who was nominated by Trump.

The Trump campaign has filed a slew of lawsuits alleging voter fraud in several states, but with little success.

Mr Biden is projected to defeat President Trump 306 to 232 in the US electoral college, which determines who becomes president - far above the 270 he needs to win.

Time is running out as states have until 8 December to resolve election disputes before the Electoral College meets on 14 December to formally declare the victor.

President Trump's refusal to concede has upended the process that normally follows a US election.

However it is not a requirement for Mr Trump to concede in order for Mr Biden to be sworn in as the 46th US president.