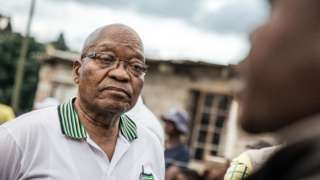 Former South African president Jacob Zuma has up to Wednesday to suggest the penalty the country's highest court should impose if he were to be found guilty of contempt.

The penalty relates to his ignoring of summons to appear before the commission of inquiry chaired by Justice Ray Zondo to answer corruption allegations - which he denies.

In January, the country's constitutional court ordered him to appear before the commission, but he ignored the order.

In last month's hearing, the commission asked the court to sentence the former president for two years, to stamp the authority of the court and show the seriousness of Mr Zuma's actions. The court however withheld judgement in the case.

Mr Zuma at the time said he was not afraid to go to jail if the courts decided so - explaining that he had not appeared before the commission because he had lost trust in the justice system.

Meanwhile, an appeals court on Tuesday upheld an earlier judgement for the state to recover money that it had spent on the former president's legal fees. It said the state funding in the corruption case was "unlawful, unconstitutional and invalid".