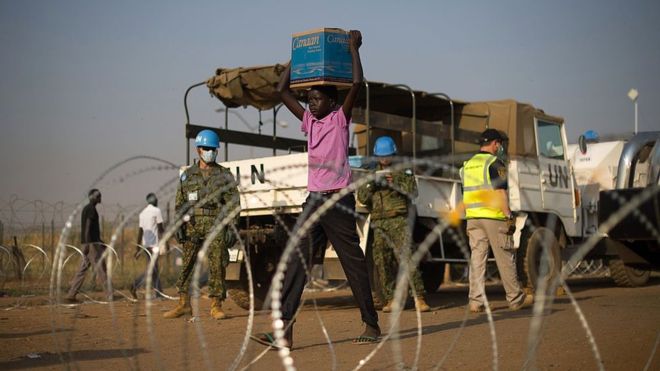 Six aid workers have been killed in an ambush in South Sudan, the UN says, in the deadliest single incident for humanitarians since the country's civil war began.

The "heinous murder" occurred on Saturday, said Eugene Owusu, the UN's humanitarian chief in South Sudan.
The UN did not say who the victims were or what aid agency they worked for.
They were traveling between Juba, the capital, and the town of Pibor.

At least 79 aid workers have been killed in South Sudan since the conflict started in December 2013, the UN says.
"These attacks against aid workers and aid assets are utterly reprehensible," said Mr Owusu. "They not only put the lives of aid workers at risk, they also threaten the lives of thousands of South Sudanese who rely on our assistance for their survival."

He called on "all those in positions of power" to stop such attacks and end "the impunity that has prevailed".
Two other attacks have targeted aid workers this month, according to the UN. A humanitarian convoy was attacked while responding to a cholera outbreak in Yirol East on 14 March, with one health worker and one patient killed.

On 10 March, local staff of an international aid organisation were detained by armed rebels during fighting in Mayendit town for four days before being released.

A man-made famine has been declared in some areas of South Sudan, and the UN says around 7.5m people are in need of humanitarian assistance.

Ethnic violence has dominated the crisis in South Sudan, which became an independent nation in 2011. The civil war began as a dispute between the Dinka President Salva Kiir, and former Vice-President Riek Machar who is Nuer.

On Thursday, UN peacekeepers protected up to 1,000 civilians in Pibor who feared they would be attacked after earlier clashes between different clans.