Google boss becomes highest-paid in US 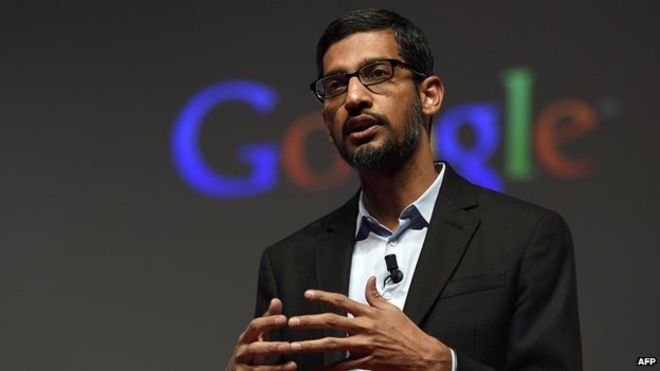 The chief executive of Google, Sundar Pichai, has been awarded $199m (£138m) in shares, a regulatory filing has revealed.

It makes him the highest-paid chief executive in the US.

The founders of Google, Larry Page and Sergey Brin, have amassed fortunes of $34.6bn and $33.9bn, according to Forbes.

Mr Pichai, 43, was awarded 273,328 Alphabet shares on 3 February, worth a total of $199m, according to a filing with the US Securities and Exchange Commission.

Mr Pichai's share award will vest incrementally each quarter until 2019. In other words, full control over the shares will pass to him on a gradual basis.

The Google chief executive joined the company since 2004, initially leading product management on a number of Google's client software products, including Google Chrome] and Chrome OS, as well as being largely responsible for Google Drive. He also oversaw the development of Gmail and Google Maps.

He previously worked in engineering and product management at Applied Materials and as a management consultant at McKinsey & Company.