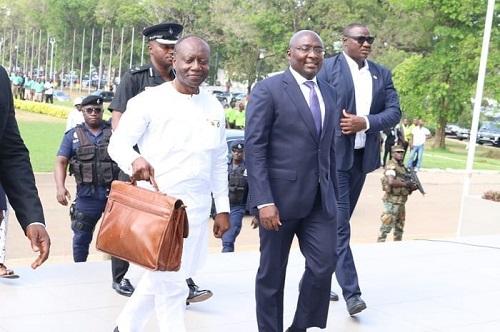 The government on Monday begun its Eurobond Roadshow with the plan of raising up to $3 billion at the end of the exercise.

The investor engagement would take the team to New York, possibly Boston and London where the government is planning to close the exercise.

It is an exercise that would see the team, carry out different set of foreign investors, hedge fund manager’s and banks on the need to participate in the offer. There will be a series of presentations, by the Finance Minister Ken Ofori -Atta, and officials of the Bank of Ghana.

The minister’s presentation would be heavy on the fiscal situation and what the government is doing to be prudent with its expenditure.

The presentations from the Bank of Ghana would also look at the monetary side and what it is doing to also firmly stabilize the cedi as well as inflation. This is because of the impact of the performance of the local currency and the inflation on their investments.

Who is leading the Eurobond Team?

Finance Minister Ken Ofori Atta is leading the team and would be joined by his Deputy Charles Adu Boahene and some officials from the Finance Ministry.

The Bank of Ghana would be on the team together with some technical officials.

It is not clear whether the Governor of the Bank of Ghana, Dr Ernest Addison would be part of the team. However, JoyBusiness can confirm that one of the governors would be on the Eurobond team.

Managers of the Eurobond Roadshow

JoyBusiness understands that JP Morgan Chase and Co may be leading or helping government raise the funds. The rest are the Bank of America, Merrill Lynch, Morgan Stanley, Standard Chartered Bank PLC and Standard Bank Group.

These are the same instructions that helped the government raise its EUROBOND cash in March 2019. This was the time that government raised up to GH¢3 billion a three-part deal with an average maturity of 7, 12 and 31 years.

Timing of the EUROBOND and Concerns

Some economists and analysts have raised issues about the timing of the EUROBOND.

This is based on the recent debt concerns raised by the IMF on their recent staff report.

Some economists are also worried about the fact that being an election year it might not be prudent to go ahead and raise this funds because of the impact on the pricing of the bond at the end of the Eurobond Roadshow.

This is because the government has put in place the required laws that will help check the government’s expenditure during the election year.

Mr Ofori-Atta said, “I think we were quite clear about managing the macro and fiscals in the past three years and as well very conservative as what we are planning to do in 2020. Therefore, we don’t think there is a challenge at all, in terms of the timing and government’s commitment to fiscal prudence and discipline.”

Mr Ken Ofori Atta also added that the government is working with these advisors because they wanted to have a smooth transaction and carry out the fundraising as early as possible.

He added that developments over the past months have also shown that the government is capable of achieving its targets.

According to the agency, the decision to assign a positive outlook reflects Moody's rising confidence that the country's institutions and policy settings will foster improved macroeconomic and fiscal stability over the medium term, in part as a consequence of the reforms implemented under the recent IMF reform program.

Moody’s added that “Those reforms are beginning to bear fruit, as seen for example in the return to primary fiscal surpluses, measures to smooth the debt maturity profile and increasingly sustainable growth prospects”.

It noted that the positive outlook “reflects increasing confidence that the government will manage those pressures in such a way as to sustain and enhance external and fiscal stability”.

Again, the sale is taking place at a time that yields on high-yield debts of emerging markets sovereigns have dropped following news that the US-China are closed to reaching a trade deal.

This is based on reports monitored from Bloomberg News. The development may fuel interest for bonds issued by Ghana.