The world economy just had a rough week 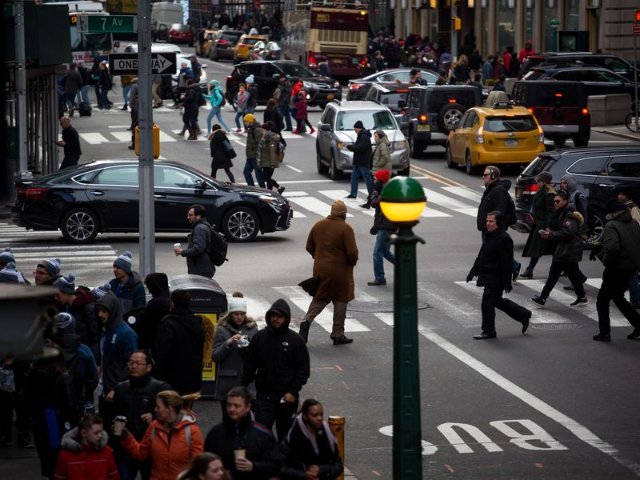 The world economy just had a rough week
Shares

The world economy risks remaining weak for a while longer.

On Friday alone, reports showed the slowest U.S. hiring in more than a year, a slump in Chinese exports and an unexpected decline in German factory orders.

With economies already undershooting expectations by the most since 2013 and the OECD slashing its forecasts, worries are mounting that the recent slowdown will last for longer, although recession fears for now remain limited.

The soft patch puts the U.S. and China under pressure to settle their trade war, which has bludgeoned sentiment, and leaves central banks needing to keep monetary policy looser than they were planning into this year. Chairman Jerome Powell said late Friday that the Federal Reserve could be patient after pausing its interest rate hikes.

Such forces may still prove enough to drive a pickup and next week witnesses further health checks ranging from retail sales data in the U.S. to industrial statistics from China and the euro-region.

“The trends in the global economy have certainly concerned markets,’’ said Philip Shaw, chief economist at Investec in London. “It’s material enough to make a difference to the policy outlook.”

The week ended with news that U.S. payrolls grew just 20,000 in February, way below the 180,000 median forecast in a Bloomberg survey of economists.

Deutsche Bank is already warning the U.S. economy could grow less than 1 percent this quarter and the bout of labor market weakness will sew worries about the spending power of consumers. On Monday in Washington, the government will release retail sales data for January, after December witnessed the worst slump in nine years. 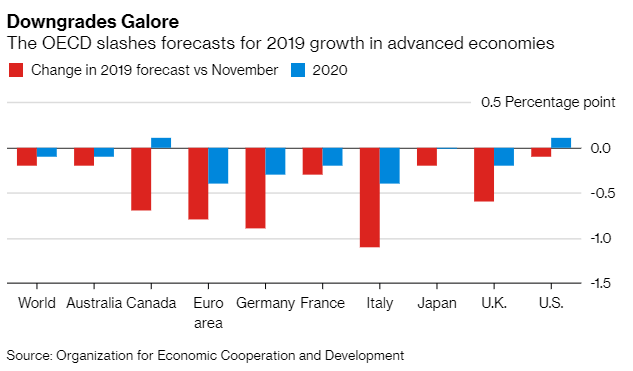 That was just one day. Manufacturing purchasing manager indexes are in contraction territory in China, Japan and the euro area, where there’s mounting concern that the bloc’s economy and markets risk repeating Japan’s lost decades of growth.
There are caveats. U.S. wage gains were the fastest of the expansion in February, and JPMorgan Chase & Co. predicts salaries in rich nations will start advancing by more than 3 percent this year. Financial conditions have also turned more relaxed after tightening into the end of last year, with the MSCI World Index of stocks up almost 9 percent in 2019.

“There’s a case that as we move through this that growth will pick up in the second half of the year,” said David Hensley, director of global economics at JPMorgan in New York. “There are supports to keep things from getting too weak.”

Much will depend on whether Presidents Donald Trump and Xi Jinping can resolve their trade dispute, clearing a fog of uncertainty that’s stopping businesses from investing and hiring. If the U.K. can avoid tumbling out of the European Union without a divorce deal, that would also help.

Trump postponed an increase in tariffs that had been scheduled to be imposed on China this month, but no date has been set for the two leaders to meet and much remains unsettled. Confidence that differences will narrow is one reason Morgan Stanley economists say this quarter will mark the trough of the global slowdown.

Another case for optimism that the worst may soon be over is that some governments and central banks are starting to dole out aid. The problem there is that they will then have less firepower to deploy if growth really falters.

China’s government this week announced a cut to its value-added tax of as much as 800 billion yuan ($119 billion) as it lowered its goal for growth to a range of 6 percent to 6.5 percent for 2019. That’s down from about 6.5 percent last year.

And the European Central Bank became the first of the major central banks to unveil more stimulus in the form of new cheap loans for banks, which came alongside a commitment not to raise interest rates until 2020.

In the U.S., Powell said late Friday that he and his colleagues are in no hurry to adjust rates as economic growth slows and inflation stays muted.

“We have seen some cross-currents in recent months,” he said . “With nothing in the outlook demanding an immediate policy response and particularly given muted inflation pressures, the committee has adopted a patient, wait-and-see approach.”