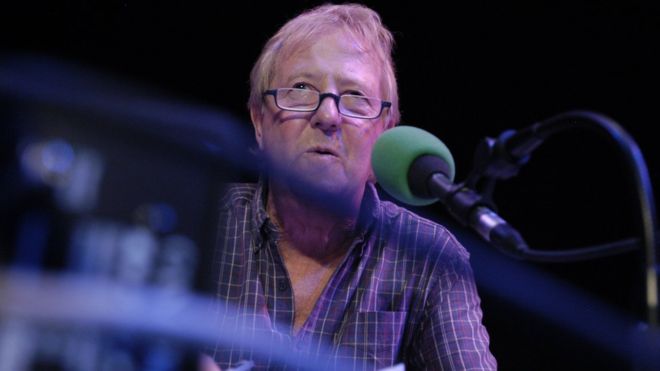 Comedian Tim Brooke-Taylor has died at the age of 79 with coronavirus, his agent has confirmed to the BBC.

The entertainer, best known for The Goodies and I'm Sorry I Haven't A Clue, died on Sunday.

Fellow Goodies star Graeme Garden said he was "terribly saddened by the loss of a dear colleague and close friend of over 50 years".

"He was a funny, sociable, generous man who was a delight to work with," Garden said.

"Audiences found him not only hilarious but also adorable. His loss at this dreadful time is particularly hard to bear, and my thoughts are with Christine, Ben, Edward and their families."

Brooke-Taylor's career spanned more than six decades and his comedic roots lay in the Cambridge Footlights, which he joined in 1960.

He started his broadcasting career on BBC Radio, before becoming one of the members of the anarchic Goodies TV show and later as a long-standing panellist on Radio 4's I'm Sorry I Haven't A Clue.

Comedian Jack Dee, the current host of I'm Sorry I Haven't a Clue, said: "It has come as devastating news to hear that Tim has succumbed to this dreadful virus - especially when we all thought he was recovering.

"Tim was a delightful man and never anything but great company. It has always been one of the great joys of my career to work with someone who was part of the comedy landscape of my childhood."

Born in Buxton, Derbyshire on 17 July 1940, his father was a solicitor and local coroner who had been wounded in the First World War and was serving in the Home Guard when Brooke-Taylor was born.