Video: It's not important for me to congratulate Sarkodie - Shatta Wale 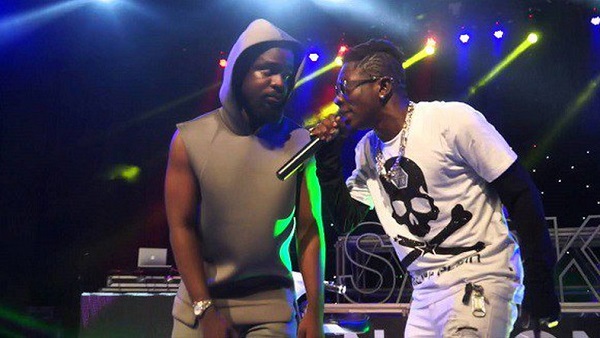 According to the self-acclaimed Dancehall King who used to be closer with the rapper, his relationship with Sarkodie fell short when he realised the kind of life the latter portrays to the public of which he is not in accordance with.

The rapper’s latest achievement was met with excitement on social media as fellow musicians and music-loving fans lauded his efforts in selling Ghana’s music to the world.

Shatta Wale, speaking on Paul Adom-Octchere’s Good Evening Ghana show explained why he has still not congratulated Sarkodie on any of his social media handles.

According to him, it’s a complete waste of time and congratulating Sarkodie will not in any way put money in his pocket, hence the reason he has been mute on the issue.

He further stated that his general focus is on money and not awards people win.

“I don’t think it's necessary...yes award is award, I don’t see award like something that will get me money into my account...I don’t see it like it’s important,” he said on the show.

Asked by the host if he hates Sarkodie, the Dancehall King said, “I don’t dislike him,” but only hates the kind of life he lives because he paints a ‘perfect’ picture of himself which isn’t true in real life.

Sarkodie and Shatta Wale, once good friends turned their backs on each other throwing unending shades at each other after the latter raged at Sarkodie in a series of interviews.

The beef between the two parties began when Shatta Wale agreed with Sarkodie to charge a specific amount for a show they were both billed for but according to the former, Sarkodie betrayed him and charged less.

This made Shatta Wale on several media platforms describe Sarkodie as a poor artiste and also a hypocrite who goes about bragging as if there’s no problem with him.

Sarkodie, in turn, stated that Shatta Wale is not a good friend for the numerous attacks on him which caused him to release the famous Shatta Wale diss song, ‘My Advice’ on October 10, 2018.