Video: Your former manager has taken you to 'juju' to destroy you - Nigel Gaisie to Lilwin 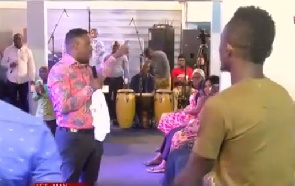 Founder and leader of the True Word Fire Prophetic Ministries (TWPFM), Prophet Nigel Gaisie says he sees in the spiritual realm that Abdul Razack Amissah (Zack), has taken Kwadwo Nkansah (Lilwin) to a spiritualist ('juju') to destroy him.

Prophet Gaisie during one of his prophetic sessions in his church told Lilwin who had visited the church for the first time that Zack, former manager of the actor wants his downfall.

“Someone has sent you to a spiritualist to bind you. This is being backed by the younger sister of your mother who is a twin. I hear a name like ‘Zack’. Someone has bought a padlock and handed it over to a spirit to shut you up. That person is called ‘Zack’” he said.

Lilwin who had been called forward smiled in response, adding that he was aware he is being hunted.

“They will not succeed because God says he’s about to bless you in abundance. The angel I work with will set fire into that padlock soon,” the prophet said afterward.

The relationship between Lilwin and Zack which traces back to 2006 soured a year ago after a misunderstanding ensued.