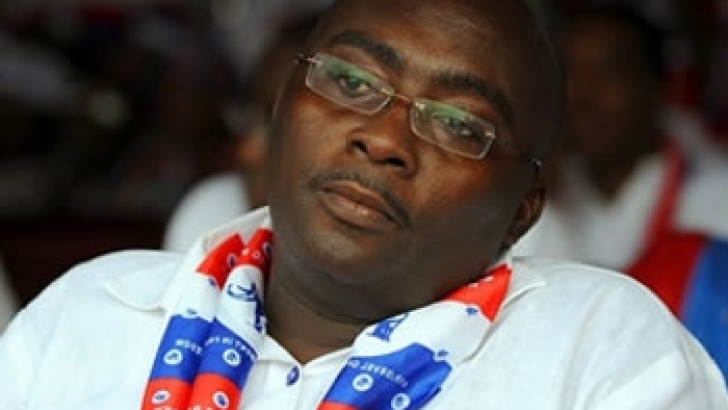 My sudden addiction to social media lately is really taking its toll on many other hobbies I use to enjoy. I hardly make time to read articles from my favourite journals and motivational books since Facebook seems to be providing me real time articles both good and bad ones.

The good ones unfortunately don't leave as much lasting impression on my mind but for my own desire to accept some Godly articles as 'special' messages from the Oracles of Almighty God to me. Other times it is to read postings from timelines of my Facebook friends, comment on those that excite me and ignore the obnoxious ones.

So I chanced on this write-up ostensibly attributed to Dr Mahamudu Bawumia, as having said that "Another major issue that I want to bring to the attention of the people is that, if we look at the Flagstaff House today, it does not reflect the people of Ghana in terms of religion."

Dr Bawumia was addressing supporters of the NPP in the Sissala East District of the Upper West region and promised that an NPP government will bring "religious balance to the Presidency".

Is this the lowest ebb that our one-time deputy governor of the Exchequer could reduce his political desperation levels to?

Dr Bawumia please for goodness sake if there's nothing more to say on the platforms as you go round, please join your boss to keep sending congratulatory messages on Twitter and Facebook because you write quite well. Your boss has lately resorted to sending congratulatory messages to Ghanaians who have lately attained international recognition, notable among them are, Abraham Atta, the ace young actor, one Victoria 'Something' who was recently appointed as a Vice President of the World Bank, that young Ghanaian/American inventor who received President Obama's award recently, and Nana Konadu Agyeman Rawlings only two days ago. The above mention personnel all received beautifully couched congratulatory messages from Nana Addo.

His other preoccupation lately has been his appearance at some churches and funerals as part of his visibility agenda with the 'Try me' cliché.

Probably the burden of having been left all alone in the 'cold' of a drab campaign without steam and motivation is dealing a hefty toll on Dr Bawumia and thereby pushing him to play the very 'last' card available to him, RELIGION.....

Ghana's constitution does not prescribe any religiously constituted presidency for us. The most important aspect is the appointment of Cabinet ministers that must reflect regional, 'gender' and religious balance.

Our history under the 4th Republic has seen a blend of Christian, Muslim and other religions coexisting without any challenges and Dr Bawumia's effusions should not be allowed to fester into our body politic.

I'm sure Nana Akufo-Addo and the NPP will see the real need to profusely dissociate themselves from such unguarded and immature pronouncement that have the potential of splitting this country into factionalism on religious grounds.

What then does religious balance at the Flagstaff House compose of, a Christian President, a Muslim Vice President, an African Traditional Religion Chief of Staff, a Hindu Deputy Chief of Staff, presidential Staffers made up of Buddhists, Krishnas, Mormons, Jehovah's Witnesses, Suni Muslims, Ahmadis, Presbyterians, Pentecostals, Charismatic, Tigari Worshipers, etc. a pure state of mindless absurdities we will find ourselves.

Dr Bawumia is slowly losing his position of a heavyweight on the Ghanaian political landscape to a place of a pedestrian serialist of either concocting and cooking up figures to represent the Ghanaian debt stock, or being used to present half-truths on behalf of the NPP, (e,g Presentation on a need for a new Voter's register).

I can clearly see him exasperated by the current instability at the leadership level of the NPP, thereby pushing him to want to create his own niche of followers but can't find the right one. His attempt at using the student front only yielded monotony on issues, thereby possibly attempting to seek refuge under religious cover.

It's not too late for Dr Bawumia to return 'home' to the NDC if the NPP is still not welcoming him enough into their fold, which probably may be exerting pressure to bear on him to sink this low. Dr Bawumia your position on this score is MOOT.