#VGMA20: CHRIS-VINCENT Writes: The 2 idiots and their bunch of reckless fans—the case of Stonebwoy and Shatta Wale 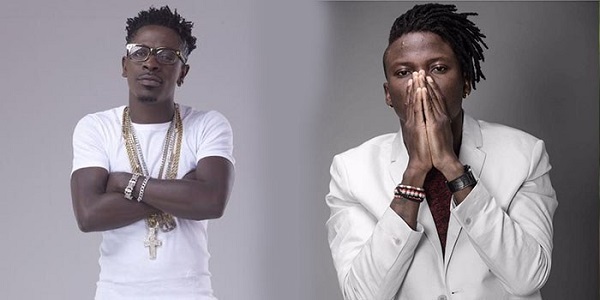 Hooliganism has for many years been a problem associated with sports in certain parts of the world, and with politics in our part of the world.

As we battle with unending violence and chaos our infantile politics regularly unleash on us, it has become apparent that we need to be worried about a new layer of emerging hooliganism, spearheaded by Stonebwoy and Shatta Wale—those I call the 2 idiots.

Of course, two people, irrespective of how fundamentally stupid they are cannot hold a whole community hostage with their antics. But the two idiots we are dealing with here, have successfully recruited a bunch of reckless unemployed youth, called fans, who are the wheels of their hooliganism, making this problem one that needs urgent attention.

Ghana is a fascinating country. My friend, Ato Kwamena Dadzie who is still on a writing sabbatical once made a circus out of the popular phrase ‘causing fear and panic’ which is regularly invoked to arrest persons the State does not like or intends to make a fool out of, whenever it wants.

We’ve seen people arrested and thrown into Police or BNI cells for uttering words on radio which are said to have caused fear and panic. Amina was even charged with the offence of causing fear and panic for largely lying or employing hyperbole in reporting an unfortunate incident.

Yet, one of the 2 idiots currently lording over Ghana’s empty Showbiz landscape, Stonebwoy, pulled a gun at a public event—undoubtedly causing fear and panic, and he’s still a free man.

Today, I do not intend to make a case for his arrest but to highlight the hovering inanity of these two “fake” dancehall musicians and their irresponsible fans.

We’ve been reduced to quasi-intellectuals when it comes to dancehall music in Ghana. But we have not complained, because these are our own and we ought to support their struggle. From their fake patois to woefully embellished lifestyles, we’ve accepted and supported both Stonebwoy and Shatta Wale, embracing the almost useless charcoal they sell to us as diamonds.

The above is entertaining, part of showbiz and no matter how silly it may seem, it adds to the package and the façade.

However, when the 2 idiots we’ve unconditionally supported take out liberty and lives for granted, by acting in a manner that could have led to the death of hundreds as a result of stampede caused by fear and panic—that’s the time we need to re-evaluate the mileage and slack we have been cutting their frolics.

These two idiots make music not aeroplanes: they mostly throw a lot of songs into the air, hoping one will become a hit. They are good at dubbing the style and sometimes lyrics of others to make their own. They’ve imported on wholesale dancehall from Jamaica and we seem to love that.

Nonetheless, we shouldn’t give fertile grounds to the growth of violence that accompanies dancehall, which the two seem adamant to grow and showcase in Ghana.

If you are still lost as to why I am confident that Stonebwoy and Shatta Wale are special idiots in the face of the widespread senselessness in Ghana at large, let me give you a summary of what happened a few hours ago that threatens the stability of our pitiable music industry.

At the 20th Anniversary of the annual Ghana Music Awards held in Accra, Stonebwoy pulled a gun on stage, in front of thousands of attendees—because he won an award that has no true value in life, and Shatta Wale attempted to walk onto the stage for whatever reason.

Why pull a gun in public? Because this is Ghana—idiots do whatever they want and no sensible person in authority does anything about it.

I remember Lil Win "smoked or promoted" weed on stage during a concert a few years ago and it is said to have cost him his main endorsement deal. What is Stonebwoy’s shocking action going to cost him?

I am absolutely convinced that the meagre and worthless fame Stonebwoy and Shatta Wale enjoy in Ghana has eaten into their empty heads. They feel they are better than everyone in Ghana and they reside beyond above the law.

Perhaps, they also think they are invisible to bullets—we will know whether this is true when one, unfortunately, shoots at the other sometime soon.

And what makes it worse is the fact that their reckless unemployed fans are susceptible to the violence they champion.

Think about this too: who allowed the gun to be taken into the auditorium?

For those who despise common sense and are only interested in the law, Section 7 (1) of Ghana's Arms And Ammunition Act - 1972 (NRCD 9) states that, “No person shall, except in accordance with the terms of a permit granted under this Decree or with the written consent of the Inspector-General of Police, publicly display any arms or ammunition (including explosives) or discharge any firearm or other weapons in any public place.”