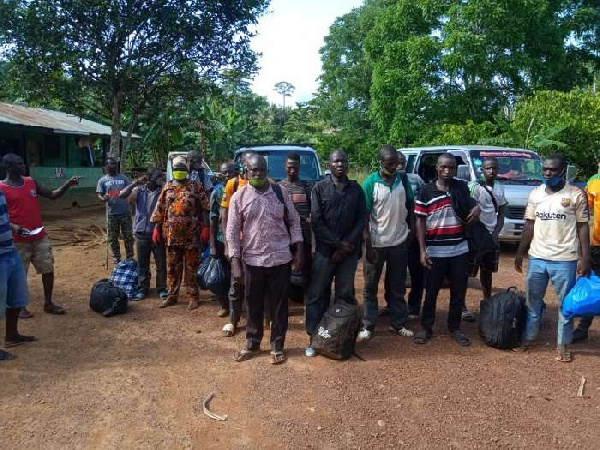 The Ghana Immigration Service has repatriated some 19 Burkinabes who entered the country illegally.

They were arrested in Savelugu in the North on May 3, 2020, and have been sent back to their country.

Public Relations Officer of the Service in the Northern Region, Christian Kobla Kekeli Zilevu explained how these Burkinabes were arrested.

â€œThey had crossed the border and had come far about 2 hours or more into Ghana, Savelugu where we had a check point and we found out that 19 of them were onboard an OA transport, we identified them and had to send them back because all of them admitted that they used unapproved routes to enter Ghana,â€

READ ALSO:Â You are wrong to compare a global pandemic like COVID-19 to 'Dumsor' - Ato Forson tells Bawumia

He added that there were attempts from these foreigners to bribe the Immigration officers as each wanted to pay GHC100 to be allowed to move on with their journey but that did not succeed.

Ever since COVID-19 surfaced and borders were closed, there have been several attempts by foreigners to enter Ghana illegally.

Many have been caught in the Volta Region and have been sent back to their countries but others are also been quarantined after testing positive for COVID-19.

President Akufo-Addo last week extended the closure of Ghanaâ€™s borders by another month.

This is all part of moves to ensure Ghana does not import COVID-19 cases again.

Ghanaâ€™s COVID-19 cases have now reached 2,719 according to the latest update released by the Ghana Health Service on May 4, 2020.

The total number of deaths is still 18 but recoveries have shot up to 294.