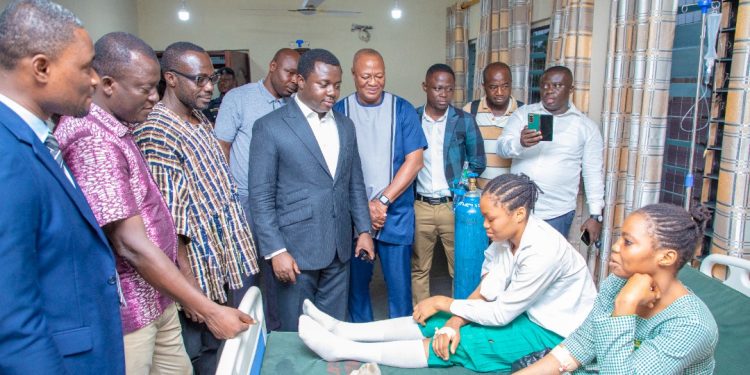 The Ministry of Education says of 22 students of the Islamic Senior High School in the Ashanti Region have been discharged after Monday’s chaos that resulted in more than a dozen students being hospitalized.

Deputy Education Minister, John Ntim Fordjour, after a visit to the school on Monday night, said all the injured students are currently safe and responding to medical treatment.

While describing the incident as unfortunate, the Deputy Minister assured that full academic work will resume on Tuesday.

He also said: “Out of the thirty-eight (38) students hospitalised, twenty-two (22) have been discharged and have joined their colleagues on campus.”

Read a statement issued by the ministry on the matter below:

The Ministry of Education has been duly briefed on the unfortunate incident that occurred on the campus of the Islamic Senior High School in Kumasi on Monday, June 13, 2022.

The Ministry regrets the rather unfortunate incident, which resulted in 38 students seeking medical attention and the temporary disruption of academic work.

The Ministry of Education would like to assure the public that all the affected students are responding to medical treatment and are in good condition.

Out of the thirty-eight (38) students hospitalised, twenty-two (22) have been discharged and have joined their colleagues on campus.

We would like to assure parents and guardians of the safety and security of their wards, as full academic work starts on Tuesday, June 14, 2022.