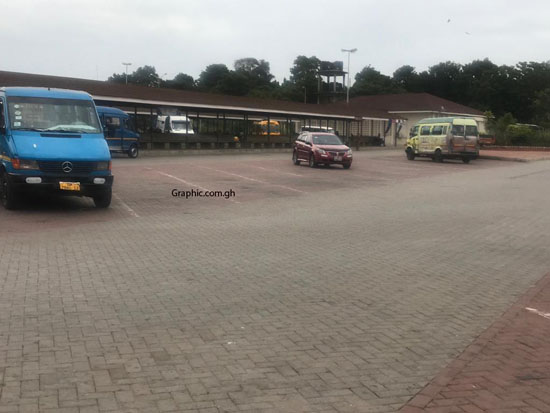 Drivers and passengers have virtually abandoned the Achimota Transport Terminal, popularly known as Achimota New Station, in Accra, that was built to reduce road accidents and ease traffic on the dual carriage Accra-Nsawam road.

A visit to the terminal last Wednesday revealed that the 800-vehicle capacity station constructed at a cost of GH¢4.5 million was being underutilised.

The terminal, said to be one of the biggest and cleanest in the West African sub-region, has a clinic, a police station, two passenger halls, passenger sheds, five canteens, toilet facilities and an administration block.

All the mini-buses (tro-tros) and taxis which had been using the shoulders of the Accra-Nsawam road were expected to use the new bus terminal.

However, majority of drivers and passengers have still refused to use the terminal, citing various reasons for their actions.

Some passengers who spoke to the Daily Graphic said they had difficulty in accessing the terminal, adding that it took close to two hours for a bus to get the full complement of passengers, instead of the 20 minutes that they were used to.

The drivers also said they did not make much money when they operated at the terminal as compared to when they were at the Achimota Old Station.

During a visit to the station, the Daily Graphic observed that some mini-buses had lined up but there were no passengers to board them.

Many of the ‘mates’ could be heard shouting and calling for the destinations of their buses, while some drivers were engaged in other activities, waiting for passengers to board the buses.

Commuters who had endeavoured to come to the station were uncomfortably waiting in the buses, wiping off sweat from their faces.
Drivers

A driver, Kwesi Aboagye, who plied the Achimota to Tema route, said he began work at dawn but had only gone one trip as of 1p.m. last Wednesday.

“I started work today at dawn but I have only gone one trip, it is already 1p.m. and the bus is not even half full for me to start the next journey,” he bemoaned.

Another driver, Abdul Malik, said: “When passengers sit in the buses for a long time, they get down, and the next time they won’t come here at all.”

“Most of us don’t own these buses. We need to make sales to pay the vehicle owners and use the rest to take care of the family but we do not get enough.

“We are also appealing to drivers of long vehicles travelling long journeys from places such as Tamale to drop passengers at the new station, because if they allow the passengers to get off the bus at the old station, they will be reluctant to walk to the new terminal,” he said.

Another driver who simply gave his name as Awudome, expressed dissatisfaction with the operations of the bus terminal task force that was arresting drivers indiscriminately.

He explained that the task force was arresting drivers at the station who were allowed to take passengers from the old station to the new station free of charge alongside drivers who were refusing to work from the new station.

In an interview, the Chairman of the Achimota main branch of the Ghana Private Road Transport Union (GPRTU), Mr Ben Anti-Boahene, explained that the attitude of the recalcitrant drivers had taken a toll on their finances.

“We came here with 1,600 buses, now we are left with 200 buses. The government promised they were bringing us to the Promised Land, but we are now in the wilderness.

“I strongly believe that the military must come in to help the task force, just like it was done in Kumasi to stop the recalcitrant drivers from loading at the old station.

Touching on the efforts being made to remedy the situation, Mr Anti-Boahene said the local branch of the GPRTU had written to the Ministries of Local Government and Rural Development and Transport but nothing substantial had been achieved.

“We actually threatened to move onto the road about eight months ago and planned one recently but the Tesano Motor Traffic and Transport Department (MTTD) Commander, Assistant Superintendent of Police (ASP), Mr Francis Aboagye, convinced us to stop.

“However, we will still be strict on the directive, where drivers are to pick passengers from the old station to the new station free of charge,” he said.

The Municipal Chief Executive (MCE) of the Okaikwei North Municipal Assembly, Nii Boye Laryea, in a separate interview, said the assembly, together with the police and the National Road Safety Commission, would, on Monday, May 6, 2019, embark on a massive exercise to direct all ‘trotros’ who stopped at the Achimota overhead to pick and drop passengers at the new terminal.

“Our intention is to reduce the increased road accidents recorded on the overhead and ensure that the drivers do not pick load and drop passengers there.

However, he said due to their limited resources, their focus would be to check the indiscipline on the Achimota overhead and then move to the Achimota Old Station.

“We have today (Thursday, May 2), removed all the towing vehicles parked on the overhead,” he said.

He added that they had issued letters to the various unions about the exercise.