Adjaye's Chamber contract was awarded to him fairly - Parliamentary Service Board 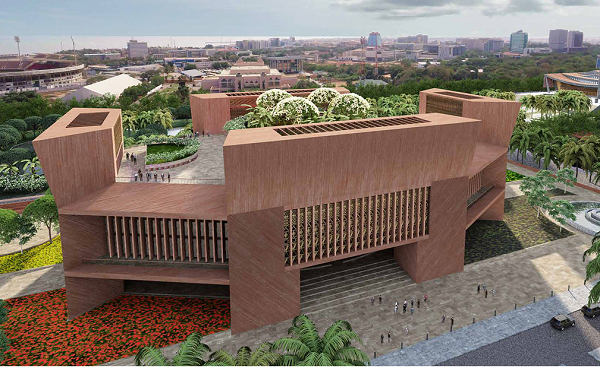 Design Associates Development Consortium an architectural firm in Ghana, made claims that the Parliamentary Service board favoured Sir David Adjaye & Associates by given them the controversial new parliamentary chamber project but that has been dismissed.

According to the board, the Consortium peddled erroneous impression in its petition to President Akufo-Addo over the award of the contract, among others to Sir David Adjaye & Associates.

The board in a release says David Adjaye & Associates won the contract fairly and was adjudged based on the scoring of a technical team empanelled by the Architects Registration Council (ARC).

Concerns were raised over Mr. Adjaye’s legitimacy to practice in Ghana because he is not a resident per the Architects Decree (NRCD 357).

The company also complained about alleged “total and absolute disregard and non-adherence to principles of transparency, fairness, equity and the laws governing the procurement of professional services by stature companies and bodies.”

The board in their clarification of the issue disclosed that Sir David Adjaye & Associates was scored 77.06% while Design Associates & Development Consortium was scored 59.47% by the technical team that reviewed the project bids put in by the two firms.

Mr Adjaye is the architect who designed the yet to be built National Cathedral.

It should be noted that, Parliament’s purpose for referring the design competition to the Architects Registration Council (ARC) was to subject the selection process to full professional scrutiny.

As the designs were submitted anonymously, they were labelled Scheme 01 and Scheme 02 by the assessment team, for anonymity and transparency.

The members of the assessment panel did their scoring independent of each other. Thereafter, the two firms were written to by the ARC to come and identify their schemes. Design Associates & Development Consortium obliged and identified their Scheme as the one labelled 02, whereas Sir David Adjaye Associates identified theirs as the one labelled Scheme 01.

Your company approved of every stage of the process. The scores as collated by the assessment team were as follows:

The results was unanimous.

Notably, Section 78 of the Public Procurement Act 2003 (Act 663) as amended provides an opportunity for appeal. It states that “Any supplier, contractor or consultant that claims to have suffered, or that may suffer loss or injury due to a breach of a duty imposed on the procurement entity by this Act, may seek review” in accordance with Part VII of the Act. To the best of our knowledge, Design Associates & Development Consortium never appealed against any part of the selection process. This resort to unjustified public damnations, is to say the least, most unfortunate. Notwithstanding this preliminary general statement, we wish to respond to the specific issues raised in your letter as follows:

This never happened. Indeed, it is a figment of your imagination to belatedly invoke sour grapes and create non-existent bad blood.

The technical assessment was based purely on the designs as submitted. The Parliamentary Service Board (PSB) offered your Consortium, the Opportunity to submit a proposal without impediments just as your competitors did.

You stated that “your (Members of the Parliamentary Service Board’s) comments and praises of the local architects’ portrayed that members were totally overwhelmed and thereby received a lot of commendation from you (emphasis ours) contrary to what was said on the radio”.

All the three presentations that were made to us, including your own, were applauded for their interest expressed, effort made, ingenuity and peculiar characteristics. The applause did not mean and could not be interpreted to mean that we were overwhelmed and therefore we had approved of a particular proposal there and then. If a firm makes a presentation to a Board and is courteously applauded, it does not mean an endorsement of the content of the presentation.

Additionally, you should note that the presentations were an informal event at which no scoring whatsoever was done.

You state in the third paragraph of your letter that “the results of the botched competition (emphasis ours) is not a true reflection of the designs that were presented and submitted”.

The Parliamentary Service Board (PSB) offered your Consortium the opportunity to submit your proposal which you did, unimpeded. The PSB did not intervene in the assessment process. The ARC conducted their own independent evaluation and submitted their results to the Board.

If you elect to describe such very transparent process as a “botched competition” you are entitled to our opinion. However, you cannot be entitled to your own set of facts. The technical assessment was based purely on the designs as submitted.

You listed three items as being exclusively your ideas:

You indicated that as contained in (your) report was what formed the basis for what the other architect submitted and (you) consider the whole process unfair (emphasis ours).

The above-listed ideas were not generated by you. On the contrary, they had been the position of the Board before the proposals were submitted. Parliament again finds what you refer to as ‘your ideas’ quite unfortunate. This is because:

iii. Segregation of human and vehicular traffic is a rudimentary safety requirement in the design of public buildings. Notably, when the three firms who made presentations to the Board were engaged in discussions, the matter of location was discussed. The Majority Leader, Hon. Osei Kyei-Mensah-Bonsu, indicated his preference for the front location to the back on the basis that the new building should rather be in front to serve as the focal point of the Parliamentary Enclave. We do not see how locating the building at the front could be an exclusive idea of your firm, as alluded to in your letter.

Your statement that such situations of selecting ‘a foreign architect’ will kill the enthusiasm of locally trained professionals.

Naturally, at the end of any competition, there could be only one winner. This does not in any way render the second placed firm as inferior. Neither does it underrate the technical competence of the firm that did not ultimately win.