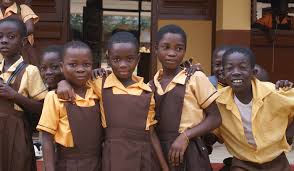 Parents have begun returning their wards to the Oyoko Roman Catholic Kindergarten School at Koforidua in the Eastern Region after a new classroom block was been commissioned.

Parents were compelled to massively withdraw their children from the school over the collapsing school structure coupled with flooding.

The Koforidua Oyoko KG school was one of the populated KG schools in the region due to the excellent performance of teachers. The population reduced drastically to 11 pupils due to parents withdrawal of their children after deadly flooding which took the intervention of fire service to rescue the pupils last year.

In an interview with Starr News ,the headmaster of the school Boampong William said: ''We had a very severe rainfall which hit in our school, the whole area was flooded when the school was in session.As the whole place was flooded we couldn't come out of the rains so we have to call our people to come and rescue us, so it took the intervention of fire service to come and rescue the teachers as well as pupils''.

Currently, the situation has improved with the construction of a new classroom.

According to reports, efforts to get the government to build a new KG block in the flood-prone area was not forthcoming.

Due to this management of the school solicited for funds from parents and philanthropists to put up a modern KG block that has been commissioned.

The headteacher is optimistic enrollment will increase henceforth.

He added that:''Previously we were having a very large enrollment and because of this structure, the parents were withdrawing their children from the school. A new classroom block has been commissioned, enrollment will increase ''.