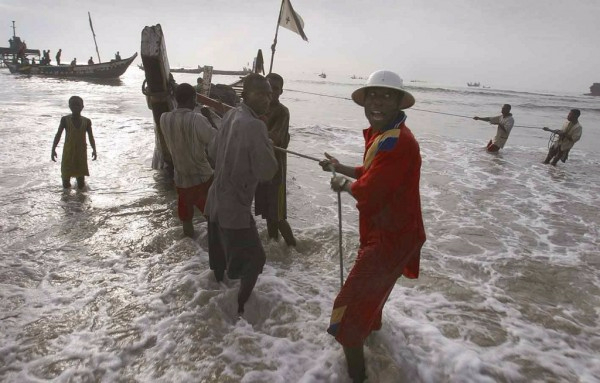 Fisher folks in the Ga South Municipality of the Greater Accra Region are joyful over the reopening of the Densu Delta after five months of observing a closed season.

Fishing activities in the Densu Delta was closed in November 2018 to allow for the regeneration of the seafood to boost yields. The closed season, the second in two years, was undertaken by Development Action Association (DAA), a non-governmental organisation, in collaboration with the Densu Oyster Pickers Associating (DOPA), under a Sustainable Oyster Fishery Management Plan.

After five months of observing a closed season, oyster farming in the Densu Delta in the Ga South Municipality in the Greater Accra Region has now been declared open, bringing joy to fisher folks who depend on the river for their livelihoods.

A reopening ceremony was held at the Tsokomey Landing Site, near Kokrobite on April 15, 2019, on the theme: “Community co-management — Paving the way for effective national resource and sustainability.”

Oyster harvesting is a major source of livelihood for many people in communities along the Densu Delta including Tsokomey, Botianor, and Tetegu.

The first closed season was observed last year,2018, which according to members of the DOPA, led to a massive boost in oyster yields. They said although the decision to ground their tools for the second time in two years was a difficult one, the successes recorded after last year's closure informed their sacrifice.

They, therefore, expressed confidence that the second opening season would also lead to a bumper harvest to compensate for the long wait.

A  member of the Densu Oyster Pickers Associating (DOPA), Bernice Agorogo said: “The closed season was a great opportunity for us. When the river was reopened, I made GH¢80 a day. That was not possible before,”

The closed fishing season was supported with funding from the United States Agency for International Development (USAID), under a Sustainable Fisheries Management Project (SFMP).

The SFMP, a five-year initiative being implemented by the Coastal Resources Centre of the University of Rhode Island, in collaboration with the Fisheries Commission, is aimed at transforming artisanal fisheries sector and rebuilding stocks.

As part of the initiative, members of the DOPA were trained in how to adopt a science-based approach in their harvesting activities to maximise yields. The Ag Director at the Economic Growth Office of the USAID, Mr. James G. Lykos, observed that Ghana’s marine fish stock had witnessed a major decline in landings over the last decade, particularly small pelagic fisheries that were important for food security.

He said as part of efforts to address the problem, the USAID partnered the Ministry of Fisheries and Aquaculture Development (MOFAD) to develop the Co-management policy aimed at supporting fisheries communities to ensure the sustainability of the resources.

Also, the Minister of Fisheries and Aquaculture development, Mrs. Elizabeth Afoley Quaye, commended the fisher folks in the area for taking steps to “deal with something that currently threatens the fish stocks on which Ghanaians mostly depend on.