Frequent Kintampo accidents down to overspeeding and human error - MP 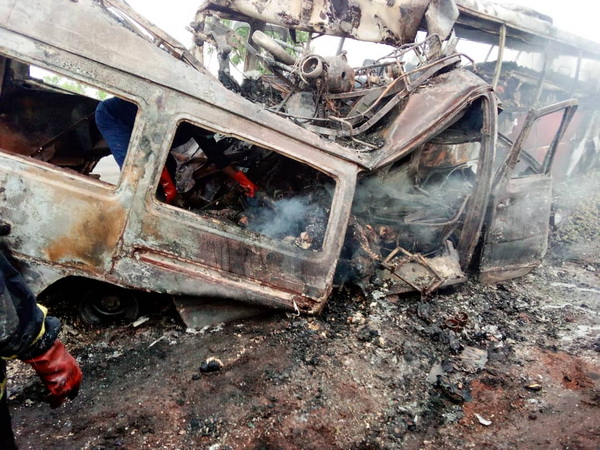 Member of Parliament for Kintampo North, Kwasi Etu-Bonde says carnages recorded on the Kintampo stretch are mainly due to overspeeding and human error on the path of road users.

This follows the confirmation of 30 people in an accident on the Kintampo-Tamale highway with 27 of the persons burnt beyond recognition.

The accident which occurred at dawn today, March 9, 2020, involved 2 buses (Benz sprinter and Yutong bus) with 36 persons onboard both vehicles.

The Yutong bus reportedly veered off its lane and collided with the sprinter bus causing both vehicles to glow up in flames.

Speaking on Starr FM today, the MP stated that accidents on the Kintampo-Tamale highway are caused by over speeding and human error.Â

''Actually from Takyiman to Kintampo is one of the best roads we have in the country and also Kintampo to Tamale too is not all that bad. The land is levelled and most drivers after they have climbed the Koforidua- Kintampo road and are on level ground , tend to overspeed that's why normally when we get accident on that stretch . But the road is good , the terrain is also good but the overspeeding and overtaking makes accident on that stretch very fatal''.

However, the Kintampo stretch is one of the accident-prone areas in the country which has claimed scores of lives in the past few years.

In 2016, the country lost seventy-one (71) lives on the Kintampo-Tamale highway where a metro mass bus allegedly attempted to overtake another car in a sharp curve but end up colliding head-on with the vehicle.

In 2018, four (4) people died on the same stretch. The incident happened when a KIA bus carrying separate passengers from Kumasi to Tamale and vice versa collided head-on with another vehicle.

In 2019 (last year), more than 70 passengers onboard, a VVIP bus headed from the Upper East Region collided with a grand bird bus over 30 passengers were equally burnt.

In February this year two women, with one pregnant also died on the same stretch.