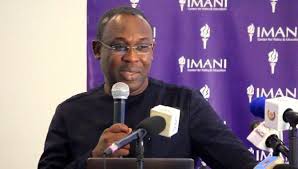 Senior Vice President for IMANI Africa, Kofi Bentil says Ghanaians does not care anymore about corruption issues in the country.

According to him, most Ghanaians feel they are not directly affected by these activities of corruptions so they turn to focus on things that matter to them most.

Sharing his views on the CDD's latest Afrobarometer survey which revealed that more than half (53%) of Ghanaians said corruption in the country has worsened “somewhat” or “a lot” during the year preceding the survey, Kofi Bentil noted that most people are not directly affected by these corruptions so they do not care about it.

"We need to note that perceptions of corruption over time become cultural, peoples perception has some cultural roots and links, it's interesting that it came out that facilitation and that's where it's feeds into our culture, you have a situation now where people see facilitation as helping them, it reflects a total feeling that the system cannot work unless you have somebody who helps you through it so they see the guy facilitating as somebody helping them and it has become a cultural phenomenon so that's one thing we need to break because we need to have confidence that the system can work, there's a difference between what offends people and what affects them and for me that's the heart of the matter, .............are people offended by corruption? I wish to submit that the average Ghanaian to stress to the point where if the thing does not affect him he doesn't care anymore, we've almost forgotten about Woyome when someone steals a million dollars does it affect him? They feel so distant from that arrangement and they don't feel affected by it so they don't care.."

He further explained that what Ghanaians focus now is performance, not corruption cases.

"Today in Ghana people care more about performance than they care about corruption."