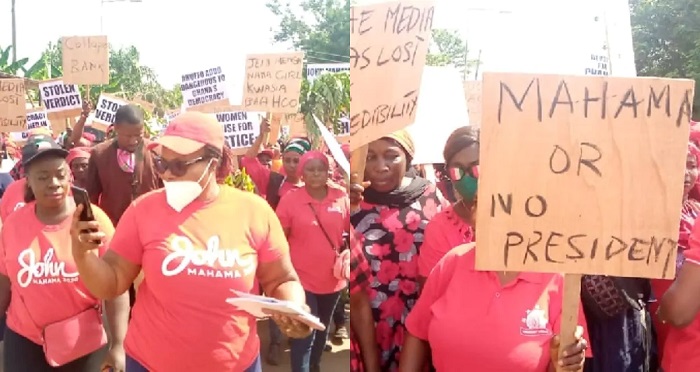 Former President John Dramani Mahama says he will not incite supporters of the National Democratic Congress (NDC) to destabilize the peace in Ghana.

The NDC has begun a nationwide demonstration, protesting the results of the 2020 presidential election.

Speaking in an interview with the Voice of America's (VOA) Peter Clottey, Mr Mahama said he has no intention to incite the supporters.

"Let me make this clear I won't do anything that will jeopardize the peace of this country, I am peace-loving, I won't incite people to go and destroy properties. I think we have reached a point in our democracy where we need to establish the principles and uphold them at all times, Akufo-Addo has shown that he will not abide by the principles of democracy".

He also described the 2020 elections as the most incompetent elections that the EC has ever supervised.

"This is the most incompetent elections we've had. I mean, everything about this elections does not reach the standards that Ghana's Electoral Commission has attained for itself," he said.

He added, "I think that the incompetence that the EC has shown, will be useful for us to do a forensic audit of the EC's own systems and the numbers to come to what the final number for the EC is because as at now, I don't know what number they are going to gazette."

Former President Mahama also indicated that he had not conceded defeat in the December polls in the interest of the over six million people who voted for him, saying if he lost fairly, he would be the first to concede, however, it is improper to sweep the chaotic elections under the carpet in the name of democracy when democracy enjoins us to stand for what is fair and just.

He said if an independent audit is done on the EC's results and the outcome proves that he had lost the elections, he will accept it and walk away as he had done in the past.