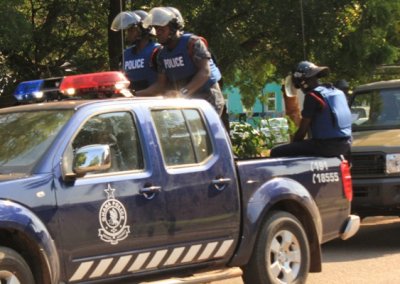 Security Analyst, Adam Bonaa has urged the Ghana Police Service to improve their patrol strategy in the country, following the murder of a nurse in the Ashanti Region.

According to Mr Bonaa, the Police Service must institute measures to improve their patrols to safeguard citizens of the country.Adding, patrol officers are normally in vehicles instead of being on the streets moving around to ensure the safety of Ghanaians.Â

Commenting on the development, on Starr FM today, Mr Bonaa said: ''It tells us how vulnerable we can all be. Do we look at the routes we take and friends we associate ourselves with? These are the questions we should be asking. In terms of education, how educated are we when it comes to been alert''.

''Even though Ghana is relatively safe we need to be careful because there are bad people around and also the police patrols most often what we see has to do with patrol officers in vehicles and motorbikes and in the past, you will see patrol officers on foot in corners, streets and bushy areas but these days they are either in the middle of the road which I think the way they conduct their patrols has to change''.

His comments come afterÂ the killing of a community nurse, Ruth Aman Eshun at Sewua in the Bosomtwe District last week after her family reported her missing.

According to unconfirmed reports, the young mother of three was ganged raped and gruesomely murdered by unknown assailants.

The Ghana Registered Nurses and Midwivesâ€™ Association with the backing of social media users has already launched a campaign, #Justice4RuthEshun, to demand the arrest and subsequent prosecution of the culprits.

Meanwhile, the BantamaheneÂ Baffour Owusu Amankwatia IV at the town hall meeting held today in Kumasi drew governmentâ€™s attention to the increasing spate of insecurity in the region.

â€œWe in Kumasi have had problems with our environment and security and I am taking this opportunity to bring it to your attention for proper address.We are all witnesses to the fact that for three months now we have heard of murders going on in Kumasi mysteriously and so far as we are concern the police who are responsible for our security havenâ€™t talked about it.â€Â