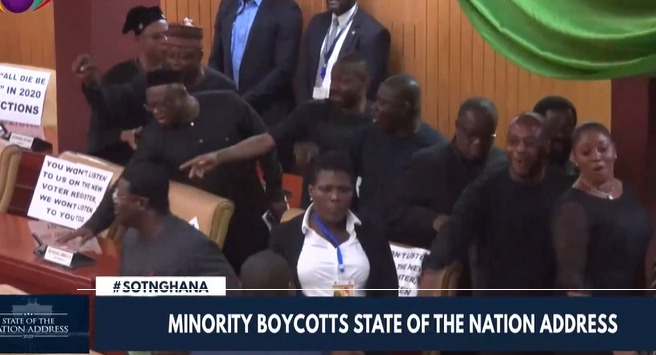 The Minority in Parliament is eligible to debate the 2020 State of the Nation Address delivered by President Akufo-Addo despite their walkout yesterday.

This is according to the Majority Leader Osei Kyei Mensah-Bonsu.

Osei Kyei Mensah-Bonsu said the Minority is not barred from debating on the message of the state of the nation.

Addressing the House a day after the SONA the Majority leader said the Minority side of the House can participate in the debate which is set to commence next week Tuesday.Â

READ ALSO:Â Majority appeals to Speaker not to allowÂ MinorityÂ debate on SONA 2020

"That at the end of a debate a question will be put and the rules provide that members who are not in the chamber when an issue is being discussed still have the right once they enter this chamber to participate in voting what it means is that if members were not in the chamber to listen to the President they still technically have the right to contribute to the debate.."

They noted that the decision to debate or not to debate will be left to the Minority to decide.

"We will allow them to do that, the issue may be a matter of morality and that one will be left to the Minority...."

We did not boycott, we only walked out - Minority explains their actions

The minority has explained the reason behind their walkout during the 2020 State of the Nation Address (SONA).

The Minority in a press conference said they walked out to show President Akufo-Addo that if he is insensitive to the issues affecting Ghanaians they can equally be insensitive to his State of the Nation Address.

The presser which was chaired by the Minority leader Haruna Iddrisu saw the Minority give several reasons for the walkout.

One major reason they gave was that the President does not listen to their views and opinions concerning the plans to compile a new Voters Register.

They then said Ghana's democracy is under threat and President Akufo-Addo is the one hindering the progress of this important factor.

The Majority who are agitated by this walkout said the Minority demonstrated bad faith by welcoming the President and other dignitaries but later walked out.